What's New
A FOCUS on Mission
Must Patience Be So Slow?
Harold Jantz: A Heart for the Mennonite Story
Lorlie Barkman: A Life of Creative Engagement
Last Days, First Days
Women in Ministry: Bertha Dyck
January Moment in Prayer “Holy Spirit—Fill Us!”
The Church as the Patient Body of Christ
Advent: Making Much of Jesus: Christmas Day
Advent: Making Much of Jesus: Fourth Advent
Home MB HeraldFeatures Regarding Re-entry

Before you pivot one more time 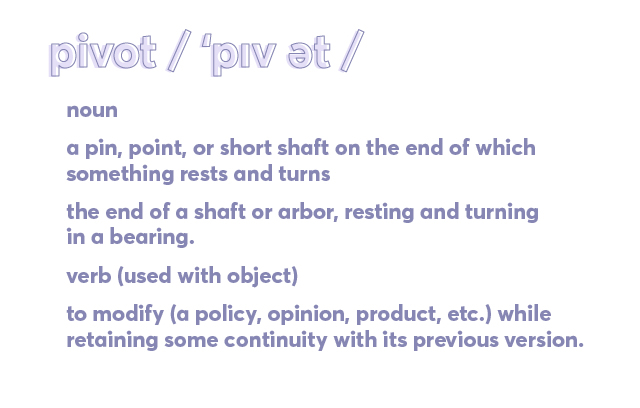 The idea of re-entry may have, at some point, had you loading the confetti cannons, excited and ready to run; or hiding under a cozy comforter, afraid, anxious and insecure. The idea of re-entry has been re-imagined countless times since then, however. And here we are, like Groundhog Day, scratching our heads.

Whatever your posture, one thing is true for all of us: re-entry isn’t what we thought it might be. And re-entry isn’t a word that has a clear definition in this season.

I like words a lot. I like the power that they hold, the way they can invite others to see differently I like their historical roots and nature. I like to learn their original intent (often far from how we understand them today but no less fascinating). There are a few words that have been used, overused, even abused and misused over the past handful of months, and I was ready to throw “pivot” on the pile until I wrestled with it a little longer.

Praxis wrote an article early on the difference between a blizzard, winter and an ice age relative to the current COVID-19 pandemic. It was easier (and most optimistic) to assume that we would weather the storm and get back to “normal” soon enough in those first weeks. But that “get back to” mentality proved to be about as useful as choosing not to put winter tires on the car simply because you hope it will pass before you need them. Winter stayed. And we are still in it—some may say with no sign of spring.

Now, please do not misunderstand me: this is not a sobering note of hopelessness. Rather, because of the hope who has a name, we must find a way to build the Kingdom in winter, rather than continue to (foolishly) wait for the storm (no, season) to pass. The Great Commission knows no bounds, nor does our call to it. And yet, it seems that as we “pivot,” we are trying to get back to where we started or, rather, the way things used to be, “normal.” It would seem that our imagination for a “new normal” looks like some variation on our understanding of the past.

But what if that isn’t the point? What if our pivot isn’t meant to take us back to the way things were? Moreover, what if we can’t get there from here?

When I ride the carousel at Disney World, it never spits me out in the same place I got on. Oddly enough, the new vantage point I have for the park as it slows to a stop tends to direct where I choose to explore next. However, suppose I don’t pay attention. In that case, that merry-go-round can have me turned around and confused pretty quickly, especially if I had decided my next destination before I got on.

Let’s get back to the overused word pile–at the top of it is this one: “unprecedented.”

My discomfort here is two-fold:

The truth is: we do have precedent. The Bible is full of examples of God’s people being unable to gather in the ways to which they had grown accustomed, of picking up and starting over, of rebuilding from the remnant of a scattered people. Our precedent is the tenacity and creativity of the persecuted church –  how she relentlessly sought out her own for the sake of the world around her. 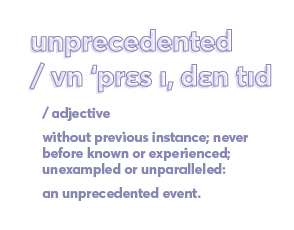 We are living in a culture of privilege and choice. Somehow we decided that, because we can’t do it the way we prefer to, or would choose to, or know how to, we should just return to that place of comfort and familiarity. to that place of comfort and familiarity. And yet, may I be so bold as to challenge you: when has the gospel ever been about your creature comforts? When we say we follow Jesus, what caveats you have not yet laid down in order to follow him? Because if I’m actually going to “live as Christ,” it won’t be easy, familiar, or comfortable.

We loved church the way it was. For many of us, the defining features of a Sunday morning aren’t even in the rearview mirror anymore. And they aren’t on the map in the place we are headed anytime soon, either. But in the words of my friend C. McNair Wilson, former Disney Imagineer, “Yesterday just isn’t a place you can get to from here.”

What if re-entry isn’t re-anything? If re-entry is the hope of returning to where we were, this hope is a little ill-footed. The prefix “re-” (again, I love words) suggests “again and again” or “backwards.” I love you, so hear me say that there is no again or backwards. Maybe not yet. Maybe not again. Maybe never. What if re-entry is what’s holding you to yesterday and not allowing you to engage with tomorrow?

What if normal just isn’t a place we can get to from here?

We are each at a different point on the continuum of COVID-19, but I cannot imagine anyone’s version of “re-entry” looks like yesterday or normal. So what if there is another way forward other than what we knew or did yesterday? Because, regardless of the permission we have for return to the ministry we miss so deeply, I can assure you that the sheep you once tended are not the same sheep. So even if you can open your doors, your ministry requires a pivot, for the sake of the ones you’ve missed in this season. For the sake of the mantle you wear. For the sake of the one.

Here’s another word for you: trauma. “In general, trauma can be defined as a psychological, emotional response to an event or an experience that is deeply distressing or disturbing. Traumatic events can be difficult to define because the same event may be more traumatic for some people than for others” (camh.ca). Friends, we have each endured trauma for months, and our tolerance and equipping for it is not universal.

There are no reasonable assumptions in this season ahead of us: no “givens,” no certainty, other than one: Our God is for us. And so we trust him with all of it—not just our lead pastor’s potentially-bad ideas or our team’s uncertain resistance or our own insecurity in the face of change—all of it. None of this is a surprise to God.

As you move forward, let me offer a few questions to help you focus on God.

Have you asked the flock you shepherd what they need? What assumptions are you making on their behalf that speak more to your comfort than their care?

What do you need to let go of that may be tethering you to yesterday’s normal? What is holding you back from dreaming, from wonder, from hope?

What if your pivot is meant to give you a better vantage point of a path you have not yet seen? On what, or who will you fix your gaze when the carousel slows down?

What one thing can you identify and try, for which previous ministry structures couldn’t allow or make space? Are you able to try new things without fear of failure?

We often quote Esther 4:14b, the “for such a time as this” cry of obedience. Earlier this month, I got stuck at verse 13 and the first half of 14:

“Mordecai told the messenger to reply to Esther, ‘Don’t think that you will escape the fate of all the Jews because you are in the king’s palace. If you keep silent at this time, relief and deliverance will come to the Jewish people from another place, but you and your father’s family will be destroyed. Who knows, perhaps you have come to your royal position for such a time as this’” Esther 4:13-14 (CSB).

Here’s what I see:

Just because we know the king, does not mean we are immune to this season’s repercussions.

Relief and deliverance will come, one way or another. The Lord does not require your participation – He is inviting you to it. He is extending his sceptre to you.

You are not in this alone. Remember, Esther wasn’t acting on her command or for her benefit. She wasn’t alone in that room.: a community fasted and prayed. And a whole nation–God’s people–was at stake.

This season will end – I promise. Your “such-a-time-as-this” is not unprecedented, and your pivot is not a spiral. Your royal position requires obedience, so what would he have us do? Ask Him. Listen. Then together, pivot according to his will. On earth, as it is in Heaven

Christie Worden Penner is the kid's pastor at WMB Church and is wildly curious about where God is calling us in and through the every day, even in a pandemic. She prays that stubborn obedience and outlandish creativity are the hallmarks of her discipleship and invites you to do the same.