What's New
Through the conflict, life carries on in Ukraine
A FOCUS on Mission
Must Patience Be So Slow?
Harold Jantz: A Heart for the Mennonite Story
Lorlie Barkman: A Life of Creative Engagement
Last Days, First Days
Women in Ministry: Bertha Dyck
January Moment in Prayer “Holy Spirit—Fill Us!”
The Church as the Patient Body of Christ
Advent: Making Much of Jesus: Christmas Day
Home MB Herald Praising God together across barriers

Praising God together across barriers

“I can see one family with a lot of members, worshipping the same Father,” says Natacha Kyendrebeogo from Burkina Faso.

She is one of four young people serving through YAMEN on the Mennonite World Conference (MWC) Assembly team in Indonesia. YAMEN (Young Anabaptist Mennonite Exchange Network) is a program that places emphasis on expanding the fellowship between churches in the Anabaptist tradition and developing young leaders around the globe.

All four members of the Assembly team are working on MWC’s five-day global gathering. Assembly happens once every six years, and the YAMEN members of the planning team are looking forward to being part of the community meeting of world-wide Anabaptist-Mennonites in Indonesia.

“The Global Church Village, the programs, the workshops: I have this whole picture of a crowd that is so joyful, doing things together,” says Loyce Twongirwe from Uganda. A filmmaker, she serves on the communications team for Assembly.

“I am looking forward to creating lasting friendships: getting to know each country, how people live, how they are as a congregation,” says Sunil Kadmaset from India.

While waiting for visas for Indonesia, Sunil Kadmaset and Ananda Mohan Murmu began to get to know the wider Anabaptist family as they served with Mennonite Christian Service Fellowship of India (MCSFI).

Kadmaset (from the Brethren in Christ in Cuttack, Odisha) and Ananda Mohan Murmu (from a Bharatiya Jukta Christa Prachar Mandali (BJCPM) congregation in Balarampur, West Bengal) lived among Mennonite Church India members in Chhattisgarh. They collaborated with Anabaptist-Mennonite organizations from eight national churches in India and Nepal.

Ananda Mohan Murmu was drawn to YAMEN after hearing from his friends who participated in MCC’s International Volunteer Exchange Program (IVEP) and how the program had an impact on their perspective. Alongside MCSFI director Benjamin Nand, he called on gardening and peace projects and he visited churches with MWC regional representative Cynthia Peacock. “People’s joy gives me my greatest joy,” he says.

“We are different states, different castes, [yet] we are still as brothers and sisters,” says Sunil Kadmaset. With MCSFI, he met people who suffered from COVID-19, yet, with help from the Mennonite family and encouragement from the Spirit, they persevered. “To know each other from eight conferences – I am content with that.”

Natacha Kyendrebeogo also tasted the fellowship of the global family before she even left home. After a military coup in Burkina Faso, “I received a lot of mail encouragement from those who don’t know me. They pray for my country; they pray for this situation. I couldn’t image the fellowship. I enjoy the love, the encouragement,” she says.

As they tend their tasks, the YAMENers are spurred on by their hopes for Assembly.

Loyce Twongirwe, started her work from an office in Uganda, and now is with the team in Indonesia, “We are advancing videos: how to register, how to book hotels. So, when they reach event, they don’t feel lost, confused, left out,” she says. “It’s a great responsibly to us to make sure it goes perfect as we picture.”

“When I close my eyes, I see lots of people around me,…with people from Africa, USA, Canada, we are together, we are praising God. Between them I am in that moment, in that place, that gives me very big joy,” says Ananda Mohan Murmu. 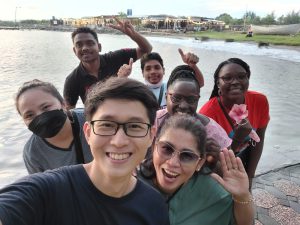 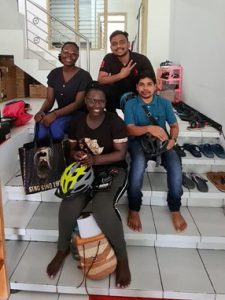