What's New
“I’m Sorry” : Pope Francis addresses a “deplorable...
A matter of love: Reframing abortion
“Any chance you might be expecting a goldfish?”
Abortion, the image of God, and faithful witness...
Choosing motherhood: The sacrifice of honouring life
MWC Assembly small but full of joy
Bad back doesn’t hold back MDS volunteer
Transition in CCMBC National Faith and Life Leadership
Leading through the trauma of covid: Part three...
The church distracted: When the main thing is...
Home MB HeraldColumns Our compact life

Today, it’s trendy to denounce consumerism and individualism. But do we know what they are? Consume This! looks for a new way to be Anabaptist in the 21st century by highlighting habits taken for granted. How are thought, faith, and action connected?—Eds.

Some people cut out dairy. Others abstain from sugar to make them feel better.

Tom and Malora Mulhern are cutting out the mall.

The Cochrane, Alta. couple and their three-year-old son Noah are on a year-long shopping detox – an experiment in not spending. “We wanted to experience what life would be like if we weren’t consumers,” says Tom, 26, a youth pastor at Dalhousie Community Church in northwest Calgary.

“We want to simplify our lives and break our buying habit and enjoy our family, and not be, ‘What else can we get?,’” adds Malora, 27, a care provider who teaches a hearing and vision-impaired student.

While they weren’t big buyers to begin with and don’t carry huge debt like the majority of modern North Americans, the couple admits they found themselves inside malls killing time and armed with shopping bags far too often. 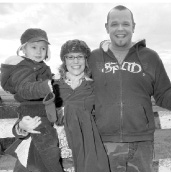 “We’re addicted. It’s a habit. We don’t know what to do with our time so we go shopping,” Tom says.

That feeling didn’t sit well. So on Jan. 1, the day countless North Americans set upon their new year’s resolutions to eat less, exercise more, or quit smoking, the family of three stopped buying.

They’re not hippies, they’re not extreme environmentalists, they’re just trying to break their buying habit, they both say. The experiment – which will most likely save them thousands of dollars, seriously declutter their home, and ultimately downsize their stuff –is meant to be a personal examination of their own lives, not a criticism of others’ spending and consumption, they stress.

Their so-called “experiment” of not shopping for a year was inspired by a larger, grassroots, non-consumerism movement that has been happening in the U.S. for the past few years and is slowly spreading to Canada.

The movement, called The Compact (sfcompact.blogspot.com), was started in San Francisco by a group of nine environmentalists who banded together and decided to stop buying for a year, starting on Jan. 1, 2006. The idea was to reduce their impact on the environment by reducing consumption, thereby reducing their contribution to the local landfills.

Instead of buying, they borrowed, bartered, or bought only secondhand, excluding food, medicine and safety-related items. Underwear, socks, and toilet paper were also exceptions to the rule.

It’s ultimately about simplifying their lives too or, as they call it, to “calm-pact” their lives. Reducing clutter and not buying removes the distraction of stuff, brings sanity and better mental health to your life, makes you more creative as you learn to make things or re-tap into hobbies, and it helps you re-connect with your family, says Natalie Odd, executive director of the Clean Calgary Association.

If you do decide to take on a prescribed period of not buying, Odd suggests talking to family and friends about it before starting to explain your reasons, discuss your motivation and hopefully get those around you to support your efforts. But starting today, anybody can do this on a much smaller scale than complete abstinence, she says.

Meanwhile, the Mulherns have mapped out a list of ground rules and parameters to help them navigate their year of living frugally.

The family can buy groceries and medicine, and anything for safety purposes (like new light bulbs). They will buy only necessary second-hand clothing for themselves or their son. They will also allow themselves to eat out occasionally at restaurants to mark a holiday, anniversary, or a special event with friends.

When things break down or must be replaced, the Mulherns will only buy second-hand. They’re encountering minor challenges – like when their computer screen died. In that case, friends gave them their old computer screen to use.

Since Jan. 1, the Mulherns spent more time outdoors in the mountains and together as a family. Malora can be found regularly at her sewing machine, making clothes from vintage fabrics sourced from thrift stores.

So far, the experiment seems to be working. “I’m really liking it,” Malora says. “I feel like I’m so much more content with what we’ve got.”

“We have so much excess and we’re learning to share that excess,” Tom adds.

Malora offers up some evidence that their year-long experiment in breaking the buying habit might just be taking root – “the less you buy, the less you want to buy.”

Do we have too much stuff?

The dollars and sense of planting a church...

An inconvenienced truth (or “Why I don’t own...

Five years without TV: Why I joined a...

Should Christians own sport utility vehicles?