What's New
A FOCUS on Mission
Must Patience Be So Slow?
Harold Jantz: A Heart for the Mennonite Story
Lorlie Barkman: A Life of Creative Engagement
Last Days, First Days
Women in Ministry: Bertha Dyck
January Moment in Prayer “Holy Spirit—Fill Us!”
The Church as the Patient Body of Christ
Advent: Making Much of Jesus: Christmas Day
Advent: Making Much of Jesus: Fourth Advent
Home News Open hands to reconciliation

Selkirk Community Church (SCC) is a small congregation of about 50 – 60 people. The church recently built a brand new building with the intention of making it a space the entire community could benefit from. These were big plans for a small congregation, but God had even bigger plans for how he was going to use their building for opportunities of reconciliation with Indigenous people.

The building wasn’t even built when God started putting in place important relationships.

Lisa and her husband Gary were discussing the church’s need for workers to help with some smaller labour projects, but Lisa thought, ‘who could we hire for only two weeks?’

Just then the phone rang.

On the line was the coordinator for the Fine Option Program, Jeannie Red Eagle. There were a number of individuals who were required to do community service hours and looking for opportunities for work.

“I don’t know how a small Church that’s primarily caucasian can say, now we’re going to do something appropriate for reconciliation, it’s simply a matter of letting God work.”

Not only was this an opportunity for many of the church volunteers to work alongside these primarily Indigenous men, but it also was the start of a relationship with Jeannie that would lead to more opportunities for the church to open up to the Indigenous community. Jeannie is a member of a number of boards and projects, including the Interlake Arts Board.

As the men were at the church working, Jeannie came to supervise and noticed an unfinished mezzanine above the gymnasium. She told Lisa it would be the perfect place to paint murals and she’d like to rent it out. The mezzanine was nowhere near complete and wasn’t expected to be done for a year or two, but with this opportunity the church rushed to finish the space.

“It had no railing. It had no stairs going up.” Lisa recounted.

But Jeannie could see the potential, and with a grant already in place she insisted the space would be perfect for her art group to paint murals for Missing and Murdered Indigenous Women and Girls.

“We rushed to get that space finished and the next thing we knew, we had murals for Missing and Murdered Indigenous Women being painted up there,” Lisa reflected. “It was this beautiful meshing together.” 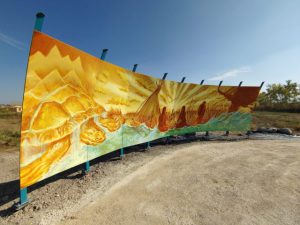 The building started to be used more and more for Indigenous programming, as well as just a space for people to meet. Lisa recalled one day driving up to the church to see a group of 20 Indigenous individuals out on the lawn. This was days after news broke that hundreds of unmarked graves had been found at residential school sites.

“They were braiding sweetgrass and talking,” said Lisa. “That was the beautiful thing about it, this was just a safe space they were able to use.”

There is also a group called the Turtle Island Project who meets in the church sanctuary to prepare for a presentation they put together, similar to the blanket exercise. It is an interactive retelling of Canadian history from an Indigenous perspective with the opportunity to play a role, and then share your thoughts of how it impacted you.

“It is all geared toward truth telling, which is such a big part of reconciliation,” said SCC pastor, Ryan Galashan. “It’s not something we could have ever figured out on our own or planned, but it was cool that in our sanctuary we would have this group working on a project like this.”

Pastor Ryan said his wife is part Sioux, and with Selkirk having a high population of Indigenous and Metis people, she has felt at home.

“She has always felt a little bit out of place wherever she’s lived. Until we moved to Selkirk,” said Ryan. “Here, she is not confused and no one wonders where she is from.”

Despite a high population, when Ryan started attending SCC there were no Indigenous people in the congregation. That is starting to change. Ryan was excited that the church band now has a Metis mandolin player and a Metis fiddle player.

“Reconciliation is coming and wanting to learn. The Church in Canada had a huge role in a lot of the hurt and the pain and the wrong. We need to acknowledge it and we need to have that posture and attitude.”

“I’ve always wondered if one day we might have an Indigenous drum as part of our worship for Jesus,” said Ryan. “Like Revelations talks about, every nation represented and worshipping before the throne.”

Both Ryan and Lisa acknowledged that none of these partnerships were their own doing. The relationships with Indigenous community members, specifically Jeannie Red Eagle, played a huge role in getting the church connected and opening up their doors to these opportunities of reconciliation.

“Reconciliation is coming and wanting to learn. The Church in Canada had a huge role in a lot of the hurt and the pain and the wrong. We need to acknowledge it and we need to have that posture and attitude.” said Ryan. “We want to be a church in our community that will not go around and not avoid, but go to and welcome these things with a posture of humility.”

Lisa and Jeannie have had many conversations about what programs and events would make sense to partner on or provide space for, but they also recognize that coming from different cultures and spiritual understandings, sometimes the answer is no.

“There is lots that we can agree on and finding common ground and building off that is important,” said Lisa. “We constantly walk that path and seek God’s guidance in that.” 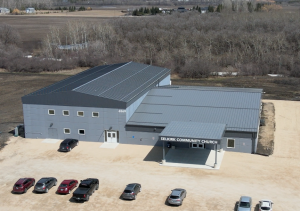 Selkirk Community Church is a Mennonite Brethren church located in Selkirk, Manitoba. They recently built a new building with the desire to provide a place not only for the church but also for the community.