What's New
A FOCUS on Mission
Must Patience Be So Slow?
Harold Jantz: A Heart for the Mennonite Story
Lorlie Barkman: A Life of Creative Engagement
Last Days, First Days
Women in Ministry: Bertha Dyck
January Moment in Prayer “Holy Spirit—Fill Us!”
The Church as the Patient Body of Christ
Advent: Making Much of Jesus: Christmas Day
Advent: Making Much of Jesus: Fourth Advent
Home MB Herald MWC Assembly small but full of joy

With its national motto of “unity in diversity,” Indonesia proved a fitting host for the 17th Assembly of Mennonite World Conference – downsized by COVID-19 restrictions but full of joy, beauty and fellowship.

In an outdoor venue at a Mennonite Bible college (JKI) on a mountaintop in the city of Salatiga on the island of Java, Anabaptists from 44 countries gathered 5–10 July 2022 for the global church reunion that’s held every six years — or seven, in this case, after a postponement due to the coronavirus pandemic.

A Christian celebration in a nation that is 87 percent Muslim, the event concluded with Sunday morning worship at the 12 000-seat Holy Stadium – home of JKI Injil Kerajaan, a Mennonite congregation that is one of Indonesia’s largest churches – in nearby Semarang. 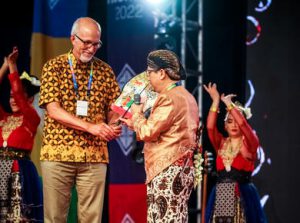 The pandemic long ago dashed hopes to fill the Anabaptist megachurch. MWC capped attendance at 1 000 because “we didn’t see how we could follow all the government’s rules that came with over 1 000,” said Liesa Unger, MWC chief international events officer. “Our biggest fear was not COVID itself but being shut down by the government.”

On-site registration was 1 144 — 594 for the entire week and 550 for a day. Sixty-four came from the United States and 31 from Canada. At least 789 registered to watch the livestream individually or in groups around the world.

The lack of MWC’s usual throng – the average daily attendance of 700 was about 10 percent of a typical Assembly – did not diminish the significance of getting a taste of what God is doing through about 107,000 Anabaptist Christians (from three synods: GKMI, GITJ and JKI)* in a Muslim-dominant and diversity-affirming nation.

Didik Hartono, pastor of the GKMI congregation in Winong Village, told how his church and a neighbouring mosque live out Indonesia’s vision of religious harmony.

The meeting places of the two faiths “seem to be as one,” he said, because a canopy extends across the street, connecting them. 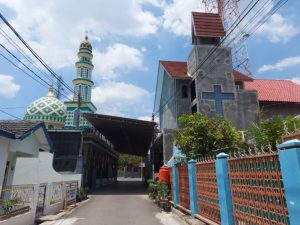 A video featured church and mosque members describing their friendship and cooperation as an example of “the ideals of Indonesia.”

“May we all keep on building the brotherhood values and live in peace with everyone and also with ones who are not the same religion as us,” Hartono said.

In one evening service, Sufi Muslim dervishes, or semazens, demonstrated the spiritual ritual of whirling. Wearing floor-length white frocks, long-sleeved white jackets and black felt hats, five men from Jepara’s Sufi Islamic community spun in circles, with arms raised, while women from the church sang and a band played. Sufism is a mystical form of Islam. Whirling is a meditative practice to draw closer to God.

The Sufi religious dance was livestreamed from the Jepara GITJ congregation. Because the congregation works closely with the local Sufi community, the pastor wanted to invite Sufi participation, and MWC officials agreed, Unger said.

The fact that the Sufi dancers were not present in Salatiga reflected the hybrid character of the assembly. Even on site, conference-goers became livestream watchers. To involve four congregations in Central Java that had expected to host visitors, MWC arranged for them to host parts of four evening services. Projected on a screen behind the stage, speakers and musicians at the remote sites reached local audiences and the main conference crowd.

On Assembly’s four full days, conference-goers worshipped both morning and evening, with workshops and tours in the afternoon. An international ensemble led 45 minutes of singing to start the morning service and half an hour to open the evening meeting. 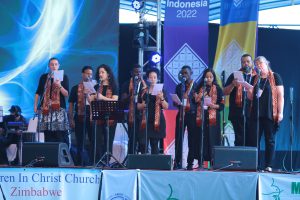 Singers from around the world contributed diverse styles. On opening night, the worship team from the 18 000-member Jakarta Praise Community Church – one of several JKI congregations that are among the largest churches in all of Indonesia – brought high energy and rock-concert volume.

Worshipers heard two featured speakers each morning and one each evening, plus other stories and testimonies, building on the assembly theme, “Following Jesus Together Across Barriers.”

Each of the four full days focused on a different continent, and speakers addressed different aspects of what Anabaptists can do together: Europe, learning; Asia, living; Latin America, caring; Africa, celebrating. North America was featured in the opening service.

Many speakers offered personal views of events and situations in their countries and described how Anabaptists are seeking to bring peace and ease suffering.

Jeremiah Choi, a pastor in Hong Kong, told of demonstrations and violence in recent years in response to the Chinese government’s crackdown on Hong Kong’s freedom.

Many people are leaving Hong Kong for the United Kingdom, including 10 percent of his congregation, Agape Mennonite Church, “to seek a place of freedom and hope,” Choi said. But he has vowed to stay, to build the church and work for peace.

“If you are facing an unpredictable tomorrow,” Choi said, “look up to God, and look to your calling.”

Tigist Tesfaye Gelagle, a leader from Ethiopia, addressed the theme of celebration by asking how it was possible to celebrate amid the sins of war, hunger, racism, oppression of women and “when I am treated like a criminal at immigration in most countries. When I am treated as a terrorist. When I am at the mercy of my superiors. How can I enjoy and dance and worship?”

Celebration is possible, she said, when we treat each other as significant.

“Unless we are significant to each other, there is no celebration of togetherness,” she said. “Seeing significance in others crosses barriers. I can forget my pain if I am significant to you.”

Salomé Haldemann of France suggested Europeans needed to be trained in peacemaking by those in the global church with experience resisting war. “Suddenly our theology and beliefs feel obsolete. A storm took over Europe, and our convictions collapsed.”

“We affirmed nonviolence when our context was peaceful, but in the face of war we see nonviolent resistance as naïve and unrealistic,” said Salomé Haldemann, a graduate of Anabaptist Mennonite Biblical Seminary. Anne Hansen of Germany read her address.

Citing the tradition of calls to action at MWC Assemblies, she noted that in 1967 in Amsterdam, USA civil rights leader Vincent Harding called on Mennonites to “come alongside Black sisters and brothers in the freedom struggle.”

In 1984 in Strasbourg, USA writer and professor Ron Sider encouraged starting a nonviolent peace force, which sparked the creation of Community Peacemaker Teams.

“What does it look like to practice love of the enemy on a collective level in our time and place?” Salomé Haldemann said.

“Maybe Mennonites could prepare for war resistance with an anti-military service, like a nonviolent resistance boot camp. It might be time for us to create a widespread training for church people to learn and practice the basics of civil resistance.”

YAB (Young AnaBaptist) Committee member Ebenezer Mondez of the Philippines cited persecution in India and political violence in Myanmar as places where Christians are suffering but getting less attention than Ukraine. 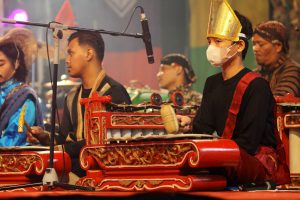 After praising Mennonites in Ukraine who are helping their neighbours through the hardships caused by Russia’s invasion – and commending those who have sent aid to Ukraine – he said: “I challenge us to do the same for our brothers and sisters in India and Myanmar. Let us learn more about their situation and how we can be the hands and feet of Christ in times of need.”

“In times of trouble, we are the extension of God’s hand,” Ebenezer Mondez said. “The miracles of God come through us. This is what living together in times of crisis looks like. We forget about our differences and disagreements, and we find our common goal for peace. Truly, crisis and hardship bring out the best in us.”

Desalegn Abebe, president of the Meserete Kristos Church in Ethiopia – whose 370 000 members make it the world’s largest Anabaptist denomination – invited everyone to the next assembly, in Ethiopia in 2028.

At the closing worship service on Sunday morning at Holy Stadium, more than 1 000 attended, sitting in every other seat for social distancing. H. Ganjar Pranowo, governor of Central Java, a region of 36 million people, greeted the crowd with references to peacemaking and Anabaptist history.

He said Indonesia’s president, Joko Widodo, was seeking to mediate between Russia and Ukraine to stop the war.

“When there is bloodshed between countries, it is our duty to seek peace between them,” he said. “Whatever the reason for war, it can never be justified.”

H. Ganjar Pranowo cited a story that many Anabaptists would recognize as the Martyrs Mirror account of 16th-century martyr Dirk Willems. He spoke in Indonesian, with the English translation projected on a screen.

He said he would not need to tell others to “imitate the Mennonites in practicing and spreading peacefulness” – as Willems did – because the principles of peace and truth are “embedded in every human soul.”

In the week’s final message, Nindyo Sasongko, an Indonesian GKMI pastor who teaches at Fordham University and lives in New York City, USA, wrapped up the theme of crossing barriers by linking it to the biblical story of Ruth, a Moabite woman who vowed to follow her Israelite mother-in-law wherever she went.

An even stronger communion

In her loyalty to Naomi, Ruth showed profound courage, breaking boundaries of nationality and religion, Sasongko said. When we follow Jesus across barriers, he said, we also follow the example of Ruth.

“Reconciliation cannot be achieved when there is no commitment to cross boundaries,” he said. 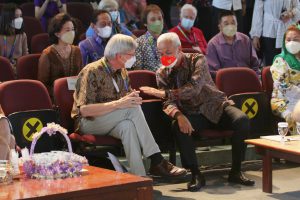 The presidency of MWC passed from J. Nelson Kraybill of the United States to Henk Stenvers of the Netherlands. A medical doctor, Stenvers has served on the MWC Deacons Commission for 10 years.

At the closing ceremony, Henk Stenvers, the new MWC president, looked toward the future.

“Now at the end of this great gathering, we look ahead with energy and hope,” he said. “In 2025, we hope to commemorate the birth of Anabaptism in Zurich and, God willing, in six years another assembly in Ethiopia. We all will work hard to make Mennonite World Conference an even stronger communion of faithful followers of Christ.”

—written by Paul Schrag, editor of Anabaptist World, a USA-based magazine. Originally printed on anabaptistworld.org and reprinted with permission.