What's New
Through the conflict, life carries on in Ukraine
A FOCUS on Mission
Must Patience Be So Slow?
Harold Jantz: A Heart for the Mennonite Story
Lorlie Barkman: A Life of Creative Engagement
Last Days, First Days
Women in Ministry: Bertha Dyck
January Moment in Prayer “Holy Spirit—Fill Us!”
The Church as the Patient Body of Christ
Advent: Making Much of Jesus: Christmas Day
Home News More than 70 years of fine print

More than 70 years of fine print 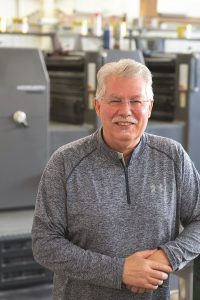 “When your name is Christian Press, you’d better live up to it,” says Ron Wood, general manager. Now called CP Printing Solutions, the printing company CCMBC fully purchased in 1964 to print the Herald will close in February 2020 as its general manager retires.

With no more Heralds to print and Wood’s retirement, CCMBC evaluated its ownership of the business and determined that concluding it would make the most sense, says Legacy CFO Bertha Dyck.

“My favourite part of the job has been customer relations,” says Wood. “We make sure our customers are happy.”

Wood says CP has a gold standard rating with many suppliers for CP’s commitment to paying bills on time and honest dealing on job bids. “We do what’s right.”

Over Wood’s 40-year career in printing, the last 27 at CP, he’s seen “gigantic change” in the industry.

When he began in 1993, CP was behind the curve, not even operating a fax machine.

By 1995, they were producing negatives in house; in 2004, they introduced a four-colour press “which changed business dramatically”; their 2005 shift from negativesto computer-to-plate technology eliminated most of the chemicals used in the process; 2008 introduced a digital press – at this point, MBH started printing full issues in
colour; and in 2010, CP started doing larger format printing like signs and banners.

“The fun part has been initiating new technology,” says Wood. CP followed about two years behind the cutting edge so costs of new equipment could be 40 percent cheaper. They received a green printing award in 2006.

In the early 1990s, MBH produced more than 30 issues a year. “There was always a Herald in the plant: one going out the door, one coming in,” Wood says.

By 2012, much of CP’s business came from outside of CCMBC and its partners, raising concerns that its operations could jeopardize the denomination’s charitable status, says Dyck. CCMBC asked Wood to close the business under the name Christian Press, incorporate as CP Printing Solutions, a for-profit company, and purchase the equipment. CP continued to rent the building from CCMBC.

Three press room staff were released at the end of December as operations wound down. Wood and his assistant Val Wood will oversee the closure of CP Printing Solutions to the end of February.

A ministry of paper and ink