What's New
MWC Assembly small but full of joy
Bad back doesn’t hold back MDS volunteer
Transition in CCMBC National Faith and Life Leadership
Leading through the trauma of covid: Part three...
The church distracted: When the main thing is...
Remote wilderness rescue turns into service with MDS...
How open is your mind?
Following Jesus together across barriers
2022 National Faith & Life report to the...
CCMBC 2022 national assembly summary
Home Arts & Culture Mennonites in North America (1874–1910) 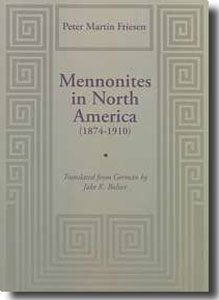 Rather than a formal history of North American Mennonite beginnings, this volume offers a compilation of contemporary reports, letters, and articles, interspersed with the author’s thoughtful, sometimes critical, comments on the emerging Mennonite presence in the U.S. and Canada.

The book contains three sections: the first focusing on Mennonite Brethren and Krimmer Brethren beginnings from 1874 to 1910; the second featuring “kirchliche” or Mennonite churches, schools, and conferences during this time; the final part highlighting the history of “Old Mennonite” or Mennonites of Swiss origin.

The selected sources are rich and diverse in content. For instance, in 1875, D. D. Claassen reports on the arrival of the first two Mennonite Brethren families in Kansas, and the founding of the Ebenfeld Church in Marion County.

Naturally, the struggles that beset the young MB church in Russia accompanied the immigrants to the new country. Should the practice of baptism be observed with forward or backward immersion? How ought isolated local congregations relate to other denominations such as the Baptists and the Adventists, whose appeal for a time lured many? “Oh, what depth of pain that caused when the number of people withdrawing rose to 31,” wrote Heinrich Adrian of the church in Dakota. How should ministers be selected without senior leaders to commission them for service?

Innumerable conflicts and divisions notwithstanding, many of the reports also mention a “holy bliss” which these immigrants derived from a cultivated spiritual intimacy – so much so that by 1885, these scattered churches met in a national convention and elected Heinrich Voth as their elder.

Field reports from India and Oklahoma together with missions treasury accounts show clearly that from the outset this young conference marshalled its resources in the pursuit of local and foreign mission work. At the same time, Friesen did not neglect to include voices which tell of vulnerable immigrant beginnings such as the settlers in Culbertson, Neb., who found themselves “in a strange land, penniless, and [understanding] not a word of the spoken language.”

The selections Friesen used to illustrate the experiences of the “kirchliche” Mennonites seem decidedly upbeat. By 1901, Die Mennonitische Rundschau described the rapid success of Mennonite farmers in Kansas, noting that “there are no more poor Mennonites anymore” because the Mennonites in western America have transformed the wide deserts into “pleasure gardens.”

Here readers discover that in 1903, U.S. president Theodore Roosevelt visited Kansas Mennonites, and told an adoring crowd in County Ellis that “no meeting has given me greater joy than the one with you today.”

The final section of Friesen’s book deals with the “Old Mennonites” of North America. In 1632, the first Mennonites arrived in North America and founded a settlement on the Delaware River. While in religious orientation, these people Friesen finds to be “ultraconservative by nature: their dress and their vehicles, and their dwellings are all the same;” culturally, these immigrants soon established themselves, operating the first paper mills in North America.

Very significantly, the selected reports deal at length with the response of Mennonites to war, to Aboriginal Peoples (with whom they developed cordial relationships), and notably, to slavery. On April 18, 1688, an historic meeting took place in Germantown, Pa., where Mennonites “demonstrating the courage of their forefathers,” challenged Quakers on the evils of owning slaves. This written submission (included in this volume), says Friesen, “was the hammer-blow” that influenced Quakers to join Mennonites in renouncing slavery.

Curiously, but no less interestingly, Friesen also includes several entries describing the origins of Mennonites in Switzerland and the draconian persecution they endured. Here, the author relies heavily on D.K. Cassel’s history, in which the Swiss philanthropist on visiting persecuted Mennonites in their seclusion, wrote “Among them, I felt as though I lived in the early, lowly periods of holy primitive Christianity.”

In a rather lengthy conclusion, the author observes that while Mennonite Brethren have organized progressive churches, their “growth in grace” has been relatively slower than in the older Mennonite groups. He finds that the North American MB church suffers from a lack of humility and a certain reluctance to acknowledge the good aspects in other Mennonite churches.

The wide-ranging sources included in this volume attest to the author’s knowledge of Christian history generally, and also his broad interest in all members of the Mennonite family, not only his own denomination.

From humble beginnings to global presence