What's New
A FOCUS on Mission
Must Patience Be So Slow?
Harold Jantz: A Heart for the Mennonite Story
Lorlie Barkman: A Life of Creative Engagement
Last Days, First Days
Women in Ministry: Bertha Dyck
January Moment in Prayer “Holy Spirit—Fill Us!”
The Church as the Patient Body of Christ
Advent: Making Much of Jesus: Christmas Day
Advent: Making Much of Jesus: Fourth Advent
Home News MennoMedia assumes full ownership of Rejoice! 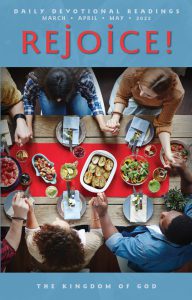 Harrisonburg, VA — MennoMedia and Kindred Productions have reached an agreement for MennoMedia to assume full ownership of the quarterly devotional magazine Rejoice!. Beginning with the Fall 2022 issue, all Kindred Rejoice! subscribers will transfer to MennoMedia. Kindred subscribers will receive a letter with their summer issue explaining how their subscription will be handled after the transfer.

“We want to make the transition as seamless as possible for all Kindred subscribers,” said Amy Gingerich, MennoMedia publisher. “We look forward to serving them for many years and want to start our relationship off right.”

MennoMedia and Kindred reached the agreement in March 2022.

“Financially and logistically, it made the most sense for Kindred Productions to transfer all ownership of Rejoice! to MennoMedia,” said Carson Samson, Canadian Conference of Mennonite Brethren Churches operations and communications director. “The Rejoice! devotionals are a regular part of many readers’ lives, and we are pleased they can continue to receive them each quarter.”