What's New
Through the conflict, life carries on in Ukraine
A FOCUS on Mission
Must Patience Be So Slow?
Harold Jantz: A Heart for the Mennonite Story
Lorlie Barkman: A Life of Creative Engagement
Last Days, First Days
Women in Ministry: Bertha Dyck
January Moment in Prayer “Holy Spirit—Fill Us!”
The Church as the Patient Body of Christ
Advent: Making Much of Jesus: Christmas Day
Home News MDS volunteers pitch in to clean up from Alberta flood

MDS volunteers pitch in to clean up from Alberta flood 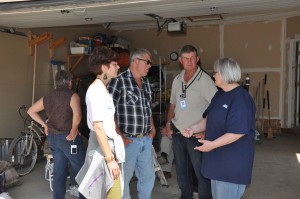 Mennonite Disaster Service volunteers are responding to flood damaged areas in Alberta. Triggered by torrential rain, the extensive flooding killed at least four people and displaced more than 175,000 others.

MDS Region V manager Janet Plenert reports that MDS crews have begun mucking out homes in Medicine Hat and High River. Many MDS volunteers have also worked with the Samaritan’s Purse crews in other locations.

MDS is poised to respond more as flood waters recede and residents return to their homes. Three MDS tool trailers are positioned for response; one in Medicine Hat and two just south of Calgary at Trinity Mennonite Church, currently the MDS staging ground.

The MDS Alberta Unit, led by Jim Dyck, will coordinate the response, with support from the Region V staff at the Winnipeg office and the broader MDS system.

Local day volunteers are needed in both Medicine Hat and High River, and should call (587) 216-6169, the Alberta Volunteer Coordinator line, to find out when and where they are needed.

The MDS Alberta Unit is in conversation with local Mennonite churches and MCC to collaborate on the flood response.

Mennonite Disaster Service (MDS) is the leading Mennonite agency in response to the Alberta flood. MCC collaborates with MDS in communication with churches, gathering requested material aid (like blankets or other items), or in other ways mutually decided upon. Donations can be made out to MDS designated to “Alberta Floods.” If and when material donations are needed, specific information will be made public. At the present time, no material donations are requested. 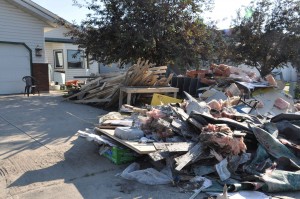 Sodden belongings piled on the street outside of a flood damaged home.