What's New
Through the conflict, life carries on in Ukraine
A FOCUS on Mission
Must Patience Be So Slow?
Harold Jantz: A Heart for the Mennonite Story
Lorlie Barkman: A Life of Creative Engagement
Last Days, First Days
Women in Ministry: Bertha Dyck
January Moment in Prayer “Holy Spirit—Fill Us!”
The Church as the Patient Body of Christ
Advent: Making Much of Jesus: Christmas Day
Home News MCC partners in Ukraine work to meet physical and spiritual needs

An MCC staff person in Ukraine, who used to work with displaced people, is now displaced herself. She talks about her experience.

In the silence that lived between the deadly warnings of air raid sirens, the sound of a small choir, singing a song of praise, echoed out of a church sanctuary in western Ukraine. Just the night before, Anna*, administrative coordinator for MCC Ukraine, had absent-mindedly hummed a few bars of the song during an evening tea break at the church.

Uplifted by that quiet moment of inspiration, the church’s pastor suggested some of the young people in the church record a performance of the song as an act of worship. He hoped the lyrics** speaking of God’s power and protection might offer spiritual comfort in a dangerous time.

But this hymn about God’s love and power isn’t the only thing the church is offering to their neighbours. Anna and her family fled Zaporizhzhia, their home in southeastern Ukraine, as the conflict edged dangerously close. They were taken in by the church’s pastor and his family near Lviv. Anna and her family immediately joined the efforts of the church to house, feed and care for as many of the masses of refugees moving to or through western Ukraine as they could manage.

They’ve filled the upper level of the church with foam mattresses and blankets to offer rest to the weary. They’re finding temporary homes for as many refugees as they can, often dozens of people each day. They pray with and for those who are without hope. And they prepare hot meals and clean water for the hungry and thirsty.

All the work Anna is doing with the church and alongside other local organizations is supported by generous donations to MCC’s Ukraine emergency response.

For years, Anna’s work has involved supporting displaced people from other parts of the country, and now she’s having that experience from the other side. She says that even as prepared as her family was physically to flee their home, it’s essentially impossible to be prepared emotionally for what it is like.

“When I came to the church [last week], I entered the building and I started to cry. I started to cry a lot, I could not stop. Because I was feeling that I lost something, or I was leaving something in the past. I understood that we are refugees now. We are far away from our home. It was only a few years ago we were serving refugees from the east of Ukraine. We had refugees in our church. And now I understand that in this time, we are refugees somewhere.”

While her experience as a refugee has been emotionally and spiritually taxing, she says she’s found a great deal of meaning and hope by choosing to help others experiencing the same challenges. 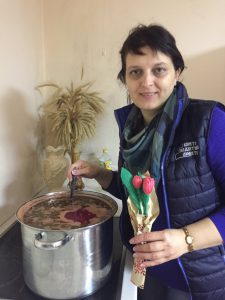 MCC staff member Anna* made this pot of borscht while on kitchen duty at a refugee shelter assembled with support from MCC by a local Evangelical Baptist church in western Ukraine. The flowers she holds were a handmade gift from her youngest daughter to mark International Women’s Day on March 8. *Her last name has been withheld for security purposes. Photo courtesy of MCC staff.

“I cannot imagine that a week ago I was as a refugee, like, I just came here,” says Anna. “But in the last few days, I was able to welcome these people who just came from these hard places. And I can see how much fear and worry they have in their eyes. But I can understand what they’re feeling. And now I can invite them to the table to sit and to be there and to eat this warm meal. And I tell them that now they’re in a safe place — praise the Lord — and that we have friends around the world. So I try to be useful. I try to be helpful for people who just arrived here.”

**Translated lyrics for the song in the video:
mcccanada.ca/stories/mcc-partners-ukraine-work-meet-physical-spiritual-needs

Almighty, invincible God, who will understand
The great Creator
We are powerless, helpless, but He,
Who came down
The world sitting in the dark light shine
God is with us
King of all creation
He took upon himself the decaying destiny of all people

Peace to the people on the earth rejoice!
God be with us!
Praise God in the highest

Peace rejoice people with Him.