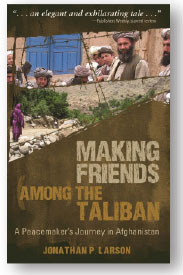 Making Friends Among the Taliban: A Peacekeeper’s Journey in Afghanistan

Understanding what it means to be nonviolent peacemakers has been important to Mennonites for as long as Mennonites have existed. Dan Terry’s story, recorded in Making Friends Among the Taliban: A Peacekeeper’s Journey in Afghanistan, embodies radical commitment to peacemaking through reconciliation.

Dan’s life is an excellent example of how to respond to brokenness, loss, suffering, violence, military control, and evil by taking time and effort to relate to the people involved, by understanding them and helping them to understand each other. He was willing to (and did!) sacrifice his life for the people of Afghanistan whom he loved.

Inspired to share the story of his childhood schoolmate (they attended mission school together in India), author Jonathan P. Larson travelled to Afghanistan after Dan’s death to collect stories about him. Larson clearly communicates relevant cultural concepts in the short stories he shares, allowing the reader to “follow” Dan into the stories despite cultural barriers. By introducing the people Dan loved, Larson draws the reader into Dan’s life; soon, Dan Terry feels like a close friend.

However, the title of the book is deceptive: it should be called Making Friends in Afghanistan. Of the many stories shared in this book, only a small handful of them involve the Taliban. The title of the documentary, Weaving Life, is much more appropriate.

Dan Terry’s unique early years and subsequent life choices shaped who he became. His father was an auditor of mission schools and hospitals, so Dan spent his childhood and adolescence in northern India, attending boarding school and travelling throughout South Asia with his family. His parents often made unconventional decisions – like driving from North India to the Netherlands rather than flying directly to North America – that afforded opportunities to experience culture and connect with people.

As an adult, Dan continued to make decisions that would allow him to connect with people in unconventional ways. When he was travelling, unlike most visitors, instead of drinking tea at the front roadside shops along the road, he would sit in the back and listen to stories from the less reputable men who gathered there. He did this to learn nuances of culture and language, and he would leave having earned the respect and friendship of those with whom he visited.

Even in situations of conflict, he looked for ways to connect – not as a foreign visitor, but as a friend seeking to understand. In one situation, approached by a young man threatening with a rifle, Dan walked with arms outstretched directly in the line of fire between the young man and Dan’s own companion. In a fatherly voice, Dan assured the boy (not more than fourteen years old) they meant no harm. Reaching the boy, Dan gave him a hug. Surprised to find acceptance and love from one he thought was an enemy, the boy began to cry.

Dan died in a peacekeeping mission in August 2010. He had joined a group bringing eye care to remote mountain villages, attempting to eliminate preventable blindness among Afghans. Close to the end of their journey, they were ambushed, and all members of the team except the Afghan driver were killed.

This particular mission was no different than many others Dan had participated in during almost four decades of work in Afghanistan. He willingly put himself in many dangerous situations in order to help people. As he desired, Dan was buried in Afghanistan, where his funeral service was attended by a “silent throng of drivers and mechanics, welders and farmers, laborers and cleaners, shopkeepers, sweepers and launderers who came in wordless, eloquent testimony to Dan’s life.”

This book inspired Eastern Mennonite University film students to create a documentary, Weaving Life: The Life and Death of a Peacemaker. Though the book and documentary include many of the same episodes, the latter has more anecdotes from people in Afghanistan, whereas the former offers stories from Dan’s daughter Anneli Terry, giving more insight into their family life.

Larson focuses almost solely on Dan Terry’s individual peacekeeping efforts. As Mennonite Brethren, we believe the church is how God has chosen to be present in the world; however, Dan worked alone. Though he loved people, they did not experience Christian community through his ministry.

Another thing absent from this book is verbally sharing Jesus. While deeds are an essential part of loving people and sharing our Christian faith with them, so are words.

Though most of us won’t find ourselves in Afghanistan like Dan Terry, his stories should inspire us to look for ways – even unconventional means – of connecting with people to transform potentially hostile situations wherever we are. But two important questions remain: “How can we apply these transformative methods in community?” and “How can we use both word and deed to share Jesus with people?”

This book begs further discussion on issues like evangelism and community, however, I highly recommend this book as an engaging story, a beautiful picture of a man who loved people passionately, and an excellent discussion starter for how can we be peacemakers in every day life.

—Jennifer Brandes lives with her husband in Saskatoon. She graduated from Bethany College with a BA in biblical and theological studies. She and her husband attend West Portal (MB) Church, Saskatoon.