What's New
MCC BC and MDS Flood Response and Partnership
Resilient Leadership: Praying against burnout
Boldly advancing the gospel from our knees
MCC sends food and relief to Cubans in...
Robert Dagenais, pastor of the Sainte-Thérèse church, is...
More donated hay needed to help farmers in...
“God’s time was perfect”
Hope and pray every day
Resilient Leadership: The gift of self care
Project Redemption
Home News Long-time Winnipeg pastor remembered for faithful service 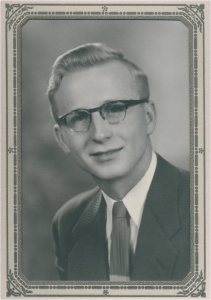 Kind. Gentle. Dedicated. Faithful. Those are some of the words used to describe Arno Fast, former pastor of Salem Community Bible Church in Winnipeg. Fast, who served as pastor at that church for 50 years, passed away June 18. He was 91.

For Harold Jantz, former editor of the Mennonite Brethren Herald, Fast was “very kind and sympathetic. He had a gentle way about him. He was the kind of person people easily felt close to.”Reflecting on Fast’s long tenure at the church, “I doubt anyone in the Mennonite Brethren Conference has ever pastored at one church as long as he did,” he says. “It must be a record.”

For 15 of those years, Fast shared ministry at the church with his grandson, Andy Rapko. Now senior pastor at Salem, Rapko remembers his grandfather as a man who “walked closely with God for many years. He taught me the centrality of the Word of God.” Rapko, 37, recalled asking him once what part of pastoral ministry meant the most to him. “I expected him to say evangelism or preaching, but he said his devotional time with God,” Rapko says. “He would often say ‘Jesus is so precious to me.’”

While Fast was a quiet and unassuming man, reflecting his rural Saskatchewan farm roots, he was highly educated, Rapko notes. “He always kept things simple, even though he had many years of higher education,” he says, noting he graduated from Mennonite Brethren Bible College (now Canadian Mennonite University). “And yet he was always learning. He never thought he had it all figured out.” Together, they made a good team, he says. “I had more energy, and he had more experience,” Rapko says. “He gave me space to try things. He was always happy when I succeeded and did well.” 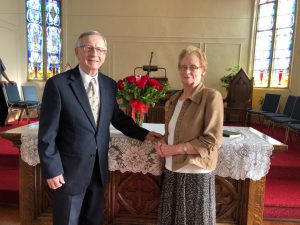 After he died, many people in the low-income neighbourhood where the church is located offered their condolences, Rapko says.This including a local man who Fast had befriended, but who had never accepted his invitation to come to church or accept Christ. “He pulled up in his truck, rolled down the window and express his condolences,” Rapko says. “He told me my grandfather ‘never gave up on me. He had a greater impact on me than he ever realized.’” Also offering a kind word was a drug dealer at a house near the 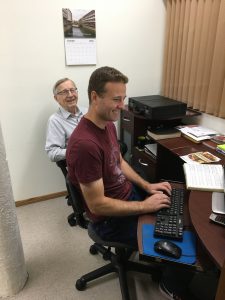 church.  “My grandfather used to visit him,” says Rapko, marvelling that a man in his 80s would be welcome at the home of someone dealing drugs. “No one was beneath him because didn’t have his life together,” Rapko says, noting Fast regularly walked the streets to visit people. “There are people in our church today who first met him on those walks.”

One person who experienced Fast’s ministry first-hand is Agnes Friesen. “He was soft spoken, and very warm,” she says. “He had a personal touch.” Friesen, who has attended Salem since 1980, adds “he was deeply appreciated by the church. He is missed so much.” Another person who knew him through his ministry at Salem is Linda Robertson. “He was a faithful servant, a shepherd, humble,” she says.

For Robertson, who has attended Salem since 1996, the phrase that comes to mind about Fast is “he had a Bible in one hand and broom in the other.” It was not unusual, she says, “to find him doing humble tasks like wiping spills in the church, emptying the dehumidifier or cleaning up garbage that had blown into the churchyard. He didn’t see anything as being beneath him . . . he was a true and faithful servant of Jesus Christ.”

Cam Priebe, who directs the Mennonite Brethren Church of Manitoba, only met Fast once, after starting in his position.  “He spoke words of blessing, letting me know that he was praying for me. It was one short interaction, but I will always remember his kind and gentle spirit and words of blessing and affirmation. It meant a great deal to me having it come from this experienced leader.”

Elton DaSilva, executive director of the Canadian Conference of Mennonite Brethren Churches, interacted with Fast for a number of years. “I came to appreciate his continued dependence on God and his family-like approach to ministry,” he says. “He knew the people he served by name, he knew their life stories, and he was a source of support to a community with diverse backgrounds. He took very seriously the sense of calling he received from God to shepherd his people.”

He was a kind and caring uncle and these comments are exactly as I expected them to be. He is missed by our family, and especially the conversations by phone in recent years. (Reynold Labun)

Thankyou for this tribute to Pastor Arno Fast. Thankyou James Fast for passing this on to us. My Mother is Pastor Aron’s sister. We visited Salem Church, met more family, and met some Sunday worshippers. Lena, his wife, worked along with him in the ministry. Pastor Andy joined the team as he grew up under Pastor Arno’s mentorship. The whole family has tirelessly ministered to the community through Salem. Rev. Bill and Barbara McLeod were part of the membership for many years. Previously they ministered in Ebenezer Baptist Church in Saskatoon before and during the Revival( circa 1970). Arno became involved in this movement as well. With nine siblings, Arno’s positive spiritual influence on his many nieces and nephews and extended family began long before his 50-year stay at Salem MB. Several generations have now entered into Christian service as Arno planted the seeds.

What a blessing Pastor Fast was to us kind loving and caring. We sure will miss him so thankful that we were able to get to know him, he truly loved the Lord and served Jesus with his whole heart!!

Henry and Judy Klassen: October 31, 2020
Just read the notice of Pastor Arno’s passing.
We have great memories of Arno and Lena Fast.
During my first year at MBBC in the fall of 1983, we decided to make Salem our church while going to college. We enjoyed serving in music and joining in with the activities of the church.
I can echo many of the comments already mentioned. He was a gracious, kind and welcoming person with a steady and gentle voice. He always had a friendly smile and handshake. He looked you in the eye when you talked with him. There was nothing wishy washy about him. He preached the word and shared the gospel in the neighbourhood. What a great example of steady, committed and faithful shepherding leadership. Our condolences to Lena and the rest of the family