What's New
Through the conflict, life carries on in Ukraine
A FOCUS on Mission
Must Patience Be So Slow?
Harold Jantz: A Heart for the Mennonite Story
Lorlie Barkman: A Life of Creative Engagement
Last Days, First Days
Women in Ministry: Bertha Dyck
January Moment in Prayer “Holy Spirit—Fill Us!”
The Church as the Patient Body of Christ
Advent: Making Much of Jesus: Christmas Day
Home Arts & Culture Founders of the church had no inkling of Christianity

Founders of the church had no inkling of Christianity 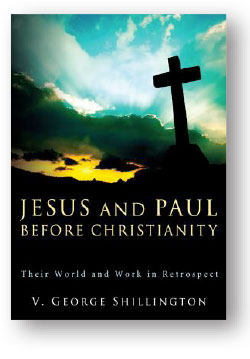 Jesus and Paul before Christianity: Their World and Work in Retrospect
V. George Shillington

“Jesus was not a Christian,” and Paul did not convert from his old religion of Judaism to Christianity. George Shillington (professor emeritus of New Testament at Canadian Mennonite University, Winnipeg) begins his latest book with these provocative assertions. In the book’s 15 chapters, divided between an exploration of Jesus in his historical context and Paul in his, Shillington sifts the evidence to show how these “two remarkable Jewish men, each in his own time and place, shaped a movement that grew into a colossal institutional religion beyond their wildest dreams.”

The book offers readers the fruit of Shillington’s life-long research in an accessible form, without technical language that could have disengaged the general reader. Packed with insight from a full career of teaching Jesus and Paul in college, university, and graduate school settings, Shillington patiently guides readers through the arguments that make his case. Readers will notice the ease with which he interacts with the “big names” in the Jesus and Paul scholarship, and the skill with which he concurs or disagrees with their assessments – giving his reasons – in view of his own commitment to write for the “reasonable and responsible reader.”

I have followed Shillington’s teaching career from when it began at Mennonite Brethren Bible College (MBBC) in 1981. I was a young college student and Shillington was a young professor. I was impressed by the way he could engage critical scholarship and at the same time re-present the haunting and attractive voices of Jesus and Paul. His chapel sermons and preaching in churches were faith formational for me.

Shillington found a Christ-community to call home at Kitchener (Ont.) MB Church just after completing seminary studies in Toronto. Pastor F.C. Peters had simply said he was welcome to join the MB church, if he was “willing to study the Word with us.” Shillington agreed. His faith story is described in the book, Why I am a Mennonite. I count this Mennonite from Ireland as one of the key reasons – largely because of his method of critical engagement – that I committed myself to scholarship in the service of Jesus and his kingdom rule.

Some of Shillington’s Jesus nuggets include: “the wonder-works of Jesus in healing the sick were those of the coming kingdom of God, in keeping with the vision of Isaiah”; Jesus’ table fellowship with “sinners” did not require their repentance, only “their acceptance of him and the rule of God that he announced and enacted”; and Jesus’ non-retaliation was not simply non-resistance, but active exposure of the perpetrator’s injustice.

Shillington aligns with the broad scholarly consensus regarding Jesus’ social setting as a rural Galilean from Nazareth, Q and non-canonical Gospels, the Gospel writers who shaped the Jesus tradition, the difference between the authentic letters of Paul and those written later, Paul’s encounter with Jesus (terming it a “call,” rather than a “conversion”), and Paul’s mission – proclaiming Jesus as the fullness of God’s law, the one who enables non-Jews to enter into the end-time form of Israel, rather than the termination of the Jewish law or Israel.

Readers interested in what can reasonably be said about the historical Jesus or the historical Paul from the evidence that remains will not be disappointed with Shillington’s assessment. It is informed, fair, judicious, and one I recommend. That said, I was puzzled by one thing: Shillington’s evaluation of what Paul meant by “all Israel will be saved” (Rom 11:26). Could Paul, as Shillington suggests, imagine an end-time form of Israel not centered in Jesus? Of course, this is hotly debated, but it seems the “mystery” can allow for at least one more possibility – one that maintains both God’s covenant promise to Israel and Jesus’ re-shaping of Israel’s mission and identity toward an end-time form.

In any case, the best way to provide a sense of the sheer magnitude of Shillington’s contribution – 30 years of teaching MB students – is to quote several sections from his conclusion.

“The same can be said of Paul: he did not envision Christianity. More than a few people have proposed that Paul was the real founder of Christianity. Yet there is nothing whatever in Paul’s correspondence with his Christ-communities to suggest that he envisioned a non-Jewish religion under the name of Jesus Christ that would encircle the world and displace Judaism. Any such scenario for Jesus or Paul grows out of a much later experience and understanding from within Christianity, and distorts the vision of the historical Jesus, and also that of the historical Paul.”

Instead, “Jesus preached the kingdom of God among his Jewish people of Palestine…. By his words and actions, Jesus challenged the existing systems of religion and politics by his announcement of the kingdom, and kingship, of God. He envisioned Israel restored, delivered from oppression, practicing justice, caring for the weak and marginalized, and reflecting the glory of God…. Paul became a chief spokesperson of that message.”

As MBs continue to strategize for reaching Canada with the good news of Jesus, Shillington’s book sensitizes us to the challenges involved: which understanding of Jesus are we inviting people to join, the one before or after Christianity?

—Jon Isaak is director of the Centre for MB Studies, Winnipeg. He previously taught New Testament at MBBS-Fresno, Cal., and is author of New Testament Theology: Extending the Table.


Visit jesusandpaulbeforechristianity.org to listen to Shillington’s broadcasts on Canadian Mennonite University’s “Sunday@CMU” radio broadcast, or to order a DVD series of complementary teaching for small groups.