“I express my deep shame and sorrow… i humbly beg for forgiveness.”

Historic. A beginning. A day to listen. An act of repentance. An apology heard around the world. Profound and personal. These are a sample of the sentiments used to describe Pope Francis’ apology to First Nations, Inuit and Metis peoples on July 25th in Maskwacis, Alberta. Maskwacis is the site of the former Ermineskin Residential School. The pope spent six days in Canada. The last papal visit took place in 1984 (Pope John Paul II). Chief Wilton Littlechild started the opening event by stating, “Your holiness, welcome to our land.” In his address, Pope Francis shared that he came with a “deep sense of pain and remorse.”

“So many of us are so heartbroken.”

The pontiff, appearing frail and somber, told listeners that the church kneels before God seeking forgiveness for, “a disastrous error… incompatible with the Gospel of Jesus.”  Pope Francis was unequivocal in describing the role of many Catholics in residential schools as being a source of great harm and abuse; this was not the way of Jesus.

A striking moment of the visit was the pope’s return of the children’s moccasins made and given to him by Marie-Ann Day months earlier. They were given to the pope at the Vatican. It was there that the pope was personally invited to come to Canada and ask forgiveness for the church’s efforts to destroy the culture of the First Nations, Inuit and Metis peoples. On that earlier visit he was asked by Day to return the moccasins when he came to Canada.

Although for a notable number the pope’s apology was a healing experience, one should be cognizant that the response to the pope’s visit and words was dramatically mixed. Some called it a heartfelt effort at reconciliation, others a disingenuous and hypocritical spectacle of a toxic religious institution. The Pope’s failure to renounce the Doctrine of Discovery and Terra Nullius, his unwillingness to give authorities information on suspected sexual offenders under his oversight, and the failure to acknowledge the culpability of the Catholic Church as an institution, being evidence of the latter. Where there is unanimous agreement is that this apology is just the beginning of a pathway to reconciliation. Alexis Nakota Sioux Nation Chief Tony Alexis summed it up best when he remarked, “You can’t just say I’m sorry and walk away. There has to be effort. There has to be work and more meaningful action behind it.”

“Every survivor will choose how they feel about the apology.”

“Our own efforts are not enough; we need god’s grace.”

For the Mennonite Brethren faith community in Canada, the pope’s “penitential pilgrimage” is a moment in history that we need to treat with humility and open hearts. There is something here that we need to hear about suffering, generational pain, forgiveness, and reconciliation. In the September issue of MB Herald Digest, more space will be given to a variety of voices. They will speak to Pope Francis’ pilgrimage, his words and the responses that have arisen among the First Nations, Inuit and Metis peoples. Commentary is also expected regarding the Mennonite Brethren church’s current opportunity to weigh our own need for reconciliation with our indigenous neighbours. We will be asked to wrestle with questions like: What is the Holy Spirit saying to us as a denomination? What is the Holy Spirit saying to us as disciples of Jesus? How can the gospel speak into this event? The unwavering confession of the Mennonite Brethren is that the gospel – Jesus himself – is the only true, complete and lasting means of reconciliation between all peoples (Ephesians 2).

“Jesus leads us from failure to hope and healing.”

In 2014, our denominational Executive Director Willy Reimer signed onto a joint Statement of Anabaptist Leaders following the work of the Truth and Reconciliation Commission. This timely and compelling document read in part, “We commit ourselves to walk with you, listening and learning together as we journey to a healthier and more just tomorrow.” For now, let me leave you with Chief George Arcand Jr.’s appeal to all citizens of Canada after the pope’s address, “Keep our people in your hearts and in your prayers.” At the very least, we as the people of Jesus can honour this petition.

“We regret our part in the assimilation process.” 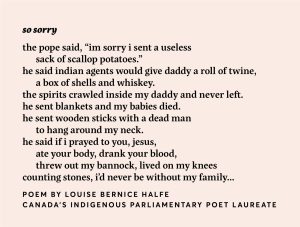 Rev. Philip A. Gunther is director of ministry for the Saskatchewan Conference of MB Churches

“You can’t just say I’m sorry and walk away. There has to be effort. There has to be work and more meaningful action behind it.”
Indeed, these words are prophetic in that they reach further than the moment at hand – these words speak truth to the myriad of issues facing the Christian church, including MB’s here in Canada. Do we have the depth of character and confidence in Christ to stay within the messy conflicts and commit to meaningful, transformative action?