What's New
Through the conflict, life carries on in Ukraine
A FOCUS on Mission
Must Patience Be So Slow?
Harold Jantz: A Heart for the Mennonite Story
Lorlie Barkman: A Life of Creative Engagement
Last Days, First Days
Women in Ministry: Bertha Dyck
January Moment in Prayer “Holy Spirit—Fill Us!”
The Church as the Patient Body of Christ
Advent: Making Much of Jesus: Christmas Day
Home MB HeraldFeatures Getting back to Square One

Getting back to Square One

From radio to new media, Square one World Ministries celebrates 75 years of ministry

In 1947, two students from Mennonite Brethren Bible College in Winnipeg — a predecessor school to Canadian Mennonite University — dreamed about using radio to share their Christian faith.

The two, Henry Brucks and Henry Poetker, had $1.98 between them, not nearly enough to pay the weekly fee of $54 to broadcast the program on local station CKRC.

But they weren’t deterred. They raised the funds from other students and friends and, on February 23, 1947, the first program of what became known as the Gospel Light Hour was broadcast.

Today Square One World Media, the new name of the former Gospel Light Hour, is celebrating the 75th anniversary of that first broadcast with the launch of a new interactive history page on its website and a $75 for 75 years fundraising campaign. A historical documentary, with a working title of “Back to Square One,” will debut in fall.

“It’s a huge milestone for us,” said executive director Shoaib Ebadi. “Those two students left a huge legacy, with the vision passed down from one generation to another.”

But it wasn’t easy at the beginning said Ingrid Koss, who does communications for Square One.

“Some people thought it cost too much, and others believed using radio was too worldly,” she said.

But the Brucks and Poettker were convinced God was calling them into that ministry.

Faced with obstacles, Brucks declared: “If this call to radio broadcasting is not of the Lord, then neither is my salvation!” When Gospel Light built its own studio in 1960, then director John Schmidt declared it was “proof that Henry Brucks’ salvation was real.”

From its modest beginning, Gospel Light Hour went on to become part of the Manitoba Mennonite Brethren Conference in 1954. In 1976 the name was changed to Mennonite Brethren Communications, and it branched out into print, music and television—including the acclaimed Third Story produced by Lorlie Barkman.

For Ebadi, the anniversary is “a celebration of God’s faithfulness over the years,” and of the support the ministry has received from donors and supporting churches.

He recounted how one woman sends Square One $12 every month.

“Each time I sign a thank-you letter for her, I thank God for her and for how she is giving what she can,” he said. 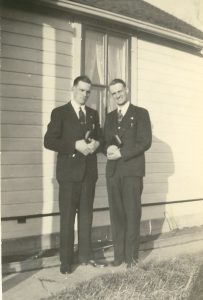 From its humble beginnings 75 years ago, Square One has grown to 12 radio and video programs in seven languages — Low German, Persian, Spanish, Ukrainian, English, Russian, and Arabic — that are shared around the world from its studios in Elmwood.

One thing that enhances Square One’s work is that program hosts come from the countries where the programs are targeted.

“They grew up speaking the language, and know the culture,” said Ebadi.

Koss, who has been collecting stories about the ministry for the anniversary, tells the story of a woman who was five years-old when the Gospel Light Hour debuted in 1947.

“She told me of the excitement in her home as the family gathered around the radio to hear the broadcast, and to celebrate the wonderful thing it was doing for the Lord,” she said.

Over the past 75 years, “millions of people have heard about the love of Jesus for the whole world,” said Ebadi. “Thousands have come to believe in him.”

Back in 1947, “they used radio to share the message,” he went on to say. “Today we are telling the same stories of how God changes and transforms people’s lives, but now we are doing it with new technology and in new contexts.”