What's New
A FOCUS on Mission
Must Patience Be So Slow?
Harold Jantz: A Heart for the Mennonite Story
Lorlie Barkman: A Life of Creative Engagement
Last Days, First Days
Women in Ministry: Bertha Dyck
January Moment in Prayer “Holy Spirit—Fill Us!”
The Church as the Patient Body of Christ
Advent: Making Much of Jesus: Christmas Day
Advent: Making Much of Jesus: Fourth Advent
Home News For all people to live with enough

For all people to live with enough

“Dad, as an extrovert, was also gentle and compassionate, and took on the role of caregiver to many people throughout his life… He gave generously and regularly with his finances, and had an interest in and desire for all people to live with enough,” says Lorie Yantzi of Tavistock, Ontario, Canada, daughter of Nelson Yantzi.

Mennonite World Conference joins with other faith-based organizations to call its members to share vaccines around the highly interconnected world by donating to the UN’s vaccination program through UNICEF. 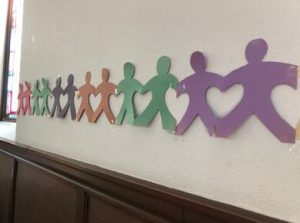 Home Street Mennonite Church in Winnipeg covered their church walls with cut outs representing how many people could be vaccinated with the money raised.

At publication time, $66 000 had been given in the name of MWC for UNICEF’s campaign for global vaccine equity.

By mid-January, the campaign sent more than a billion vaccine doses to 144 countries with a target to deliver more than 4 billion by the end of 2022.

More than 5.6 million people in low- and middle-income countries have received a two-dose vaccine. The campaign also supports health care, ensuring the recipient countries have the cold storage, transportation systems and trained personnel in place to distribute the vaccines when they arrive.

In Africa, the average vaccination rate is only 8 percent, compared with 60 percent in high income countries. In Tanzania, home to more than 42,000 Mennonites, only 3 percent of the population has been vaccinated. 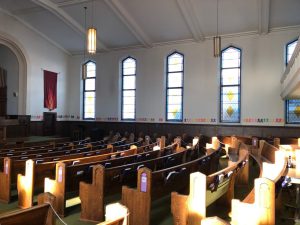 Home Street Mennonite Church, Winnipeg, Manitoba, Canada, responded to MWC’s call to Love Neighbours, Share Vaccines over the Advent season. The congregation covered their church walls – one and a half times around – with cut outs representing how many people could be vaccinated with the money raised.

“Thank you for challenging us and remind us about our global neighbours,” says church leader Gordon Janzen.

“The threat of the pandemic will not be over for some of us until it is over for all of us. Vaccines play an important role in lessening that threat end and enabling us to gather in person again,” says J Ron Byler, MWC interim chief development officer. “We are grateful for the donations from our members who bring that goal closer as we look ahead to MWC’s global Assembly in Indonesia.

As church members reflect on Christ’s humble sacrifice for others, MWC invites you to consider supporting our global family through our Love Neighbours, Share Vaccines campaign.

You can read more about the ‘Love Neighbours, Share Vaccines’ campaign here.