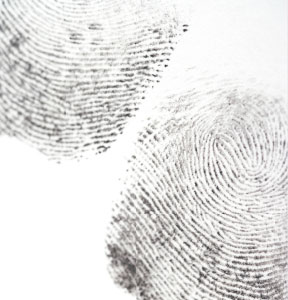 As part of his graduate studies in archaeology, an acquaintance of mine had the privilege of going on a dig in Petra, Jordan. During the excavations, he found a shard of pottery that he was allowed to keep. (This surprised me, but maybe there are lots of “bits” available.)

The artifact itself is non-descript. Although it was found in an area dating from around the time of Christ, it’s just a brownish-red, slightly rounded wedge of pottery. It was probably part of a bowl or pot, and appears as if it could be any age.

But there’s one fascinating detail. Fingerprints – clearly discernible to the eye or touch – appear in the hardened clay, accidentally left behind by the person who made the piece two millennia ago. It was his or her unintentional signature on something that may have been an ordinary, everyday household article in its time – just another pot in the cupboard which has taken on another life in its antiquity.

The shard possesses a singular stamp of individuality: the fingerprint.

I was fascinated by the personal, immediate connection created by this bit of trivia. It’s not just that a person’s fingerprint is a true expression of distinctiveness. The print on this memento brought history to life. It was made by a real person – so different and yet, in some ways, so like me. My mind flooded with questions: What did the potter look, talk, and smell like? What sights, smells, and sounds were present as the pot was being made? And how was it used?

It’s about connecting. The exotic – distant in time and place – became closer and familiar.

What does that fingerprint say to us, who are called to live out and speak about the realities of another ancient time and person? How do we give “spiritual artifacts” – truths from thousands of years ago – currency today?

Christians are often accused of living in a spiritual or cultural museum, hanging on to things of the past, and woefully out of touch with the present. Yet, we’re people rooted in historical realities: “Do this in remembrance of me” (1 Corinthians 11:24). Jesus Christ followed in a long genealogical line – a line that’s important for gaining a richer understanding of our faith.

The fingerprints we place on these spiritual artifacts are our lives “in Christ” (1 Corinthians 1:30). As we carefully, thoughtfully, and intentionally work out what being “in Christ” looks like, we make connections between the past and present.

What does Jesus’ unconditional love have to do with my need for approval? What does his unhurried life say to my anxious need to be busy? How do the natural rhythms of retreat and engagement, of service and refreshment that I see in Jesus speak to the frequent imbalances in my own life?

When others see that this ancient “God-life” has currency in contemporary settings, they’ll take note. They’ll recognize the difference in our lives. They will connect. The “old, old story” will have a new freshness, thanks to our fingerprints – physical and spiritual – on God’s work, and thanks to his fingerprints on us.