What's New
Through the conflict, life carries on in Ukraine
A FOCUS on Mission
Must Patience Be So Slow?
Harold Jantz: A Heart for the Mennonite Story
Lorlie Barkman: A Life of Creative Engagement
Last Days, First Days
Women in Ministry: Bertha Dyck
January Moment in Prayer “Holy Spirit—Fill Us!”
The Church as the Patient Body of Christ
Advent: Making Much of Jesus: Christmas Day
Home News Executive servants take up the towel

Executive servants take up the towel

“As a worldwide community of faith in the Anabaptist tradition, people in ministry are key to Mennonite World Conference,” says César García, MWC general secretary. After Assembly 17 and associated meetings, there are new people serving this global family of churches.

The General Council selected new continental representatives for the Executive Committee for 2022–2028: 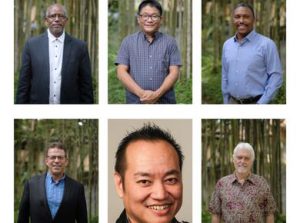 Linda Dibble, moderator of Mennonite Church USA, will serve until 2025, finishing a term that was vacated. A representative for Europe will be appointed at the Executive Committee meetings in December, which will be held in Kitchener, Ontario, Canada.

Two members from each continental region are elected from the GC; a president and vice president are also elected by the GC. The treasurer and general secretary are also members of the Executive Committee.

At Assembly in Indonesia, the presidency of MWC transferred from J. Nelson Kraybill to president-elect Henk Stenvers from the Netherlands (2022-2028). Lisa Carr-Pries of Canada became vice president (2022-2025) to complete the term of Rebecca Osiro of Kenya, who stepped down for family reasons.

At December meetings, the Executive Committee will confirm the following appointments: chair of the Peace Commission, new General Council appointments to the Commissions and new YABs Committee members.

“MWC is called to be a global communion,” declares the Mennonite World Conference Reference Notebook. “This implies that our focus is not only on the goals we want to achieve, but also on how we achieve them and what type of community we are as we move toward them.”