What's New
A matter of love: Reframing abortion
“Any chance you might be expecting a goldfish?”
Abortion, the image of God, and faithful witness...
Choosing motherhood: The sacrifice of honouring life
MWC Assembly small but full of joy
Bad back doesn’t hold back MDS volunteer
Transition in CCMBC National Faith and Life Leadership
Leading through the trauma of covid: Part three...
The church distracted: When the main thing is...
Remote wilderness rescue turns into service with MDS...
Home Arts & Culture Destiny’s Hands 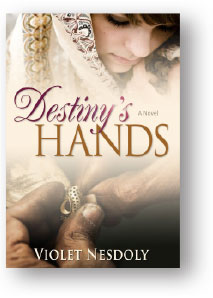 Orenburg Settlement, USSR, 1926. My Mennonite grandmother Agatha had prepared smoked sausages and zwieback for her family’s journey to Canada. She readied her children, giving each one something to carry. Five-year-old Henry, the youngest, was put in charge of the teakettle.

I sometimes wonder what went through my grandmother’s mind during the stressful departure. She didn’t want to leave home, though her family and village had suffered at the hands of Communist oppressors. On the other hand, her husband felt sure God was leading them to a better life in Canada.

Maybe Agatha’s thoughts were something like those of the ancient Israelites in Egypt. Their life was difficult. Slave drivers forced them to spend long days making bricks under the hot sun. Yet when God promised to deliver them and lead them to a new land, many were reluctant.

From Sunday school days on, I’ve been familiar with the Israelites’ story. I know that God delivered them. He led them into the desert, where he eventually directed them to build a tabernacle to honour him. However, I view the narrative in a new way after reading Violet Sperling Nesdoly’s novel Destiny’s Hands.

She presents the story through the eyes of Bezalel, a young Israelite skilled in creating artistic works from precious metals, jewels, and other materials (Exodus 31).

At the beginning of the novel, we encounter Bezalel working for the Egyptians, helping to create the gods they worship. His life isn’t difficult. His Egyptian masters treat him well because they value his talents. However, young Bezalel is painfully aware of his fellow Israelites’ suffering.

Then Moses and Aaron arrive with an astonishing message: Trust and obey Yahweh/God. He will deliver you from slavery.

Bezalel is caught between the Egyptian world and the new life Moses and Aaron promise. Though tempted to stay in Egypt, he accompanies his family and the other Israelites out of the land. During their escape and afterwards, he experiences one miracle of Yahweh after another. Nevertheless he still struggles with divided loyalties.

At the heart of many of Bezalel’s struggles is his ability to create with his hands. For example, he wears an Egyptian amulet that he believes he needs in order to continue creating. The problem is, his faith tells him he should remove the amulet because it’s a symbol of the old life. Finally, he sheds it, though in doing so, he thinks he may be saying goodbye to his talents forever.

As it turns out, Bezalel’s talents find their greatest fulfillment after he surrenders them completely to Yahweh. In the end, he and his friend Oholiab are put in charge of other craftspeople in creating the beautiful things required for the tabernacle (Exodus 36).

The author of Destiny’s Hands is a good plotter, skillfully presenting conflicts in Bezalel’s personal life within the larger context of the Israelites’ experiences. She knows how to pace a narrative. Action is presented with just enough detail. Yet she doesn’t pile action on action without giving us time to think about it and its effect on the characters, especially Bezalel.

I’m a better person for having read this book. I believe it’s a good read for anyone, especially young adults evaluating their talents, testing their loyalties and considering their options in life.

Violet Sperling Nesdoly, author of Destiny’s Hands grew up near the village of Dalmeny, Sask., where she attended Dalmeny MB Church with her family. She’s a graduate of Bethany Bible Institute, now Bethany College, in Hepburn. Her gratis work there was cooking oatmeal porridge for breakfast. The assignment fit in well with her early rising habits.

Now living in Vancouver, Nesdoly is active in Christian publishing. She writes devotionals, stories, articles, poetry and other materials for adults and children. Among writers’ groups she belongs to are Inscribe Christian Writers’ Fellowship and The Word Guild.

Her 224-page paperback novel Destiny’s Hands was a finalist in the 2013 Word Awards, Historical Fiction category.

Elma Martens Schemenauer is an author. She grew up near the village of Elbow, Saskatchewan. As a teenager, she sometimes played the organ in the country Mennonite church her family attended. Her forthcoming novel Consider the Sunflowers was inspired by the storytelling traditions of her Mennonite family and community.

Virtues amid hardship in vivid history

A refreshing, engaging tour through Exodus