What's New
Through the conflict, life carries on in Ukraine
A FOCUS on Mission
Must Patience Be So Slow?
Harold Jantz: A Heart for the Mennonite Story
Lorlie Barkman: A Life of Creative Engagement
Last Days, First Days
Women in Ministry: Bertha Dyck
January Moment in Prayer “Holy Spirit—Fill Us!”
The Church as the Patient Body of Christ
Advent: Making Much of Jesus: Christmas Day
Home Life & Faith Conversations on the MB Confession

Conversations on the MB Confession

How MB congregants are thinking through their Confession of Faith 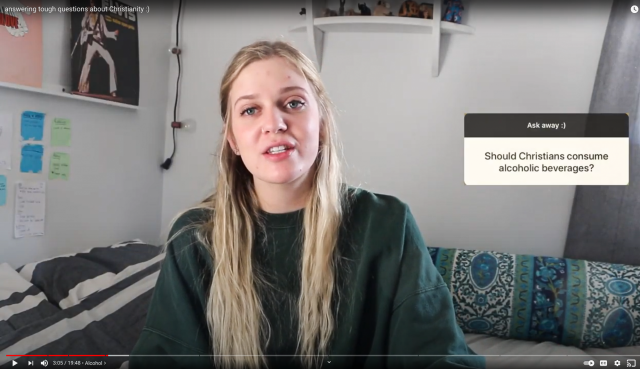 Mikayla Doerksen takes to her YouTube channel to tackle tough questions about Christianity.

How is the MB Confession of Faith, first embraced by the Mennonite Brethren Church over one-hundred-and-nineteen years ago, still impacting and influencing Christians today? Since its revision in 1999, the MB Confession of Faith has been a crucial resource of faithful living for more than 36,000 Christians across Canada. With the recent proposal made by the Canadian MB conference to revise article eight (“Christian Baptism”), questions around the purpose and role of the confession are becoming more and more frequent.

One individual asking such questions is Mikayla Doerksen, an undergraduate student from Canadian Mennonite University and member of Westwood Community Church, who recently featured the MB Confession of Faith in a YouTube video answering frequently asked questions about Christianity. Majoring in Biblical and Theological Studies and Social Sciences, Doerksen’s video seeks to engage with questions that many Christians might have about their theological traditions as well as questions non-Christians might have about the Christian faith. In answer to a question about denominational differences, Doerksen refers to the MB Confession of Faith as a resource for MB Christians that has helped her “figure out her beliefs.”

“The idea for the video came out of my time working at the VIA Rail train station,” says Doerksen, “Through my conversations there with many former Christians, agnostics, and atheists, I had to take a step back and evaluate what my faith actually means, beginning with the MB Confession of Faith.” Doerksen describes how, in an age of religious deconstruction, there will always be many credible sources on the internet where many people her age acquire information, “yet when it comes to the Confession of Faith there is a relationship to it that far exceeds its role as a document or a list of rules.” While it may not be mentioned in the average Sunday morning sermon, Doerksen claims that “it is the community that embodies the Confession. The community is the aspect of the church that demonstrates what the Confession is all about, which is ultimately discipleship.”

Similarly, high school teacher Ramon Rempel has assigned his Bible class at Mennonite Brethren Collegiate Institute a unique project. Rempel asks his class to choose one article from the confession and to spend some time researching it, making connections between the article and relevant biblical passages, and developing arguments for whether the article should be revised, preserved, or removed. “We begin way back with the Nicene Creed and other early creeds and then move into the Schleitheim Confession and then, eventually, this one,” says Rempel, “We ask what a confession is, what changes and developments have happened to the confession over history? All of this is to show that confessions are not written in stone (so to speak), that they are constantly changing and being adjusted.”

Once the students have completed their assignment, CMU professors Paul Doerksen and Andrew Dyck (also Assistant Professor of Christian Spirituality and Pastoral Ministry at MB Biblical Seminary) are invited to hear the presentations in order to provide feedback and ask questions of the students. After contemplating the various projects, Dyck shares that “some students consider the confessions to be heavy-handed or rules-based. They feel that the confessions need to be softened, which is usually connected to views around love given to them by their surrounding culture. One student pointed out that the thing missing from the confession is prayer, that the MB confession has little to link the big theological claims about God to ways of faithful living.”

While not all of the students in Rempel’s class come from MB backgrounds, Rempel describes the value of theological thinking as “not necessarily a matter of finalizing one’s own perspective, but rather, a journey of empathy.” Rempel reports that for some students, this project is an exercise in researching their roots and heritage, while for others it is an exploration of what a meaningful life signifies outside of their own perspectives. For those students who come from church-based backgrounds, Rempel explains, “With all of the theological decision-making happening above them, most high school students feel separated from theological thinking. They think of their church experiences as primarily performative and so remain uninvolved when thinking about topics of faith. This project is to get them to think about themselves as participants in the life of the church.”

This winter marks the third enactment of Rempel’s experimental assignment which he anticipates will continue into future years. As Rempel puts it, “Students want meaning. Confessions are ultimately about meaning. They want to do things with their lives that matter. Our job is to show them that this work is not yet done. It is dynamic and unfinished, and it is in their hands.”

Delegates from MB churches will decide on the proposal for revision of the eighth article this June 2021.

https://www.openbible.info/topics/change I encourage to take these references seriously.