What's New
Multiply September Ukraine Updates
Volunteers in B.C. honour Leamington woman tragically killed...
Delete or not to delete, that is the...
Believers bring water for drought baptism
Encouragement to those in the arena
Keeping attention and making an impact: A few...
Open hands to reconciliation
From the editor
Approaching truth and reconciliation with love in our...
MB Seminary offers new MA in Transformational Leadership...
Home News CFL newbie knows his family is behind him

CFL newbie knows his family is behind him 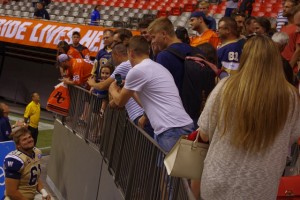 A single family occupied a whole section at BC Place stadium in Vancouver this summer. Some 75 family and extended family members, plus many of their friends, turned out to cheer on rookie player Matthias Goossen, a member of Willingdon Church, Burnaby, B.C.

Son of Rick and Brenda Goossen and a four-year player (and ultimate captain) on the Simon Fraser University (SFU) Clansmen, Matthias is now a member of the Winnipeg Blue Bombers football team. The offensive lineman joined the team as second pick in the 2014 CFL Canadian draft.

The family celebration on July 25 marked the first of only two occasions this season when the BC Lions are at home to the Bombers. The Goossen family filled up Section 206 at BC Place, many of them wearing blue #61 Goossen football jerseys. Friends spilled across the aisles to nearby seating.

Goossen says he knew “something was up with my family, but it was so cool to see them support me like that.”

Goossen is used to big family gatherings. Both sets of grandparents frequently invited up to 20 family members for Sunday dinner. And his paternal grandmother would invite up to 80 extended family at Christmas and summer each year. 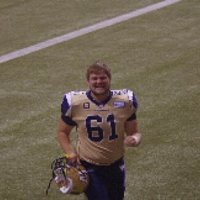 However, for Goossen, it was a bigger crowd at BC Place. “Some of my friends from high school even came to the game,” he says. Vancouver College, his high school, claims to have more alumni playing in the CFL than any high school in Canada, according to his coach, Doug Pauls.

Goossen says his father looked into VC for him because it is a renowned football powerhouse, and adds, “I am still involved with VC and attribute much of my success to my time there.”

Goossen remembers thinking it was unrealistic to want a career in football. Now, he can hardly believe it has come to pass. “Really, it’s always been what I wanted to do,” he says. “I’m now a pro CFL football player – and that’s a pretty sweet thing to be able to say.”

Being a professional also means hard work. The Bombers get the day off after a game or after travel, but this is a full-time job, with compulsory team training from 9:00–1:30 each day, followed by further work “on your own stuff” for another 2–3 hours. Being a professional is much harder than college football, he says. “But it’s still fun. I love it.”

Goossen misses his church as he settles into Winnipeg life. He has been part of Willingdon since “the start of my living memory.” He has visited two Winnipeg churches so far, but says, “The team is rarely home on Sundays, so it has been a challenging time.”

Goossen’s faith and church life are important to him, and he is grateful for Blue Bombers (and Jets hockey) chaplain Lorne Korol. He adds, “Our team chapel is like my church.” 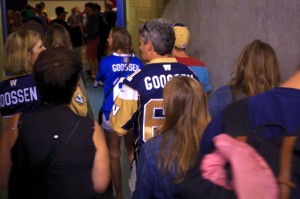 Goossen was also active at SFU in the evangelical organization Athletes in Action. It was there that he met Kia Van Laare, an SFU basketball player. They were engaged in April and plan to marry next January. Their first home together will be Vancouver until the start of the 2015 football season. Then they’ll move to Winnipeg.

There may be more than one or two relatives on hand to see them off.—Barrie McMaster, B.C. correspondent

What’s so dangerous about youth sports?