What's New
Through the conflict, life carries on in Ukraine
A FOCUS on Mission
Must Patience Be So Slow?
Harold Jantz: A Heart for the Mennonite Story
Lorlie Barkman: A Life of Creative Engagement
Last Days, First Days
Women in Ministry: Bertha Dyck
January Moment in Prayer “Holy Spirit—Fill Us!”
The Church as the Patient Body of Christ
Advent: Making Much of Jesus: Christmas Day
Home News CCMBC National Director attends 2022 ICOMB Summit 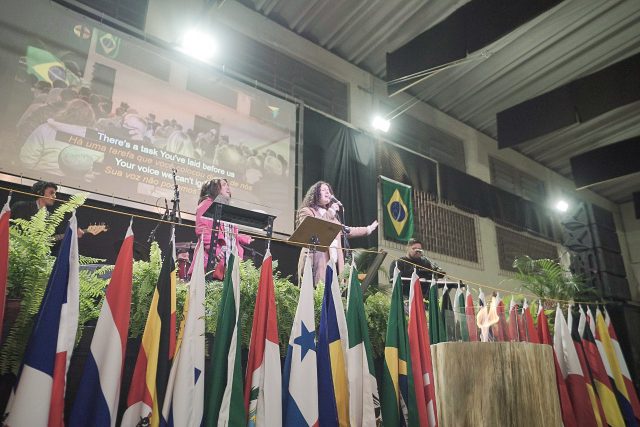 The ICOMB (International Community of Mennonite Brethren) Summit is an annual event that consists of an Assembly with reports and decision-making, as well as a Conference. This year it was held in Brazil and the conference was “Depertar 22”, meaning ‘Awakening 22’.

“The most rewarding thing was the opportunity to listen to what was happening in the different regions and pray.” DaSilva said. “Anyone that went there was extremely challenged by incredible stories of faith.”

DaSilva described some of the stories of people working in areas without sufficient resources, but who continue to sacrificially work for the Kingdom of God.

“God is showing up for them,” continued DaSilva. “These stories invite us to take greater risks for the Kingdom of God in our own work.”

Aside from sharing stories and reports from different nations, a number of discussions took place including voting in a new board for ICOMB.

DaSilva also took part in a annual flag exchange. There were 26 flags representing 22 nations that are a part of ICOMB, plus another 4 that are upcoming. The names of each country were put in a bowl and representatives each selected a country from the bowl. This year Canada picked Brazil.

“We took a flag from that country to bring back to the office and pray for them,” DaSilva explained. “Next year we bring the flag back and pick another country.”

During the Assembly, ICOMB also invited regions to organize themselves as regional communities. Canada met with the United States to explore the idea of creating an ICOMB North America and discussions went well. The goal of this regional ICOMB would be to learn from each other and other countries, as well as to encourage our larger community of Mennonite Brethren organizations.

DaSilva said the event was an inspiring few days and was well attended by people both international and from Brazil, praying, worshipping, and building relationships together.