BEIRUT, Lebanon – Eight of Alice Joubanian’s grandchildren—all under eight years old—lived with her and her daughter in a Beirut camp for Armenian refugees when a massive explosion of ammonium nitrate rocked the city on Aug. 4, 2020.

As the sound and power of the explosion destroyed buildings and killed about 200 people, Joubanian’s daughter, Maria Berberian, ran to help the children, four of whom were her own and four who were her brother’s. In the chaos, she fell and broke her arm.

Berberian, a single mother, joined thousands of others in Beirut who were injured that day, making an already difficult life more so. Unable to keep working as a caregiver and housekeeper for an older woman in Lebanon, Berberian was fired.

As of late October, she had not yet found work to support her mother and the children. She was the sole wage earner for the household even before the explosion because her brother and his wife left their children with Berbian and Joubanian, who is a widow, infirmed and elderly.

Berberian tried to stretch food supplies she had by pretending with her children that the flour and water she baked was shwarma, a Lebanese meat dish. Popcorn became a meal cooked over a fire made with scavenged wood because they couldn’t afford gas for their stove.

Caption for media: A food box for a large family contains a variety of legumes, pasta, meat, oil, salt and tea. It is intended to meet about half the food needs for a family in a month. MCCs partner The Popular Aid for Relief and Development, will distribute monthly boxes of food through August 2021 to about 1,000 families in Beirut who were affected by the massive explosion of sodium nitrate in August 2020. MCC photo/Stephanie Dyck

But when the family ran out of food completely, Joubanian turned to MCC’s partner organization, The Popular Aid for Relief and Development (PARD), for help. Through MCC’s account at Canadian Foodgrains Bank, PARD is providing half the amount of dry food their family needs each month from October 2020 to August 2021.

About 1,000 vulnerable families, such as large and female-headed households like Joubanian’s, will receive rice, lentils, bulgur, pasta, beans, canned fish, chickpeas, oil, sugar, salt and tea. The food will help sustain them until they can find work or solve other problems caused by the explosion.

“We are now able to cook and make meals for our children,” said Joubanian.

Garry Mayhew, MCC representative for Lebanon, Iraq and Syria with his wife, Kate Mayhew, said MCC’s post-explosion work is critical to its mission and Christian witness.

“We are called to be the hands and feet of Jesus,” Garry Mayhew said. “We continue to grieve at the enormity of the suffering that is happening in this part of the world.”

People in Lebanon were already struggling with a political and economic crisis before the explosion, Mayhew said. The value of the Lebanese lira has decreased by 85 per cent since October 2019, and about 50 per cent of the population lives below the poverty line.

Zakaria Amsheh has a motorized tuk-tuk he used to sell coffee and tea, but it was severely damaged in the explosion along with his house. His 12-year-old son, Mahmoud Amsheh, who was tending the business at the time was thrown almost 15 feet by the explosion, exacerbating a nervous system disease he already has. 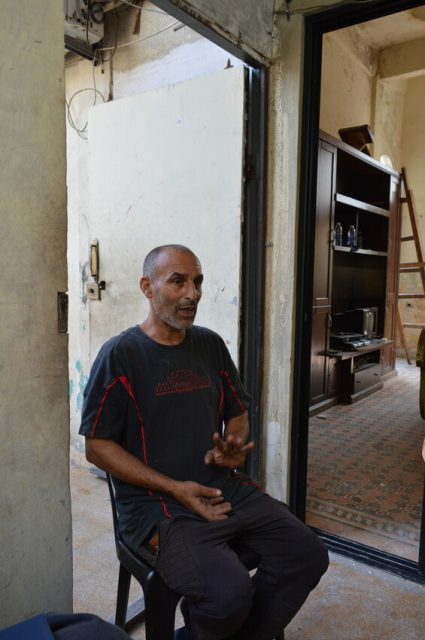 Caption for media: Zakaria Amsheh says the monthly food parcel he receives from MCCs partner, The Popular Aid for Relief and Development, is enough to feed his family. The food support allows him to pay for medication and monthly doctor visits for his son, who has a neurological condition. MCC photo/Stephanie Dyck

Several organizations helped Zakaria Amsheh to repair his house and tuk-tuk, but customers are hesitant to buy from him because they fear getting the coronavirus. He follows COVID-19 precautions, in part, to encourage sales.

The food box he receives from PARD each month helps Amsheh support his wife and three children, including Mahmoud, who needs medication and monthly doctor visits.
The need for food has become more critical since Jan. 14, when Lebanon started an 11-day, 24-hour lockdown to reduce the burgeoning hospitalizations from COVID-19.

Before the lockdown, PARD was able to give comforters, individual hygiene kits and family-size relief kits containing towels and hygiene supplies to about 600 households affected by the explosion. Another 400 families will receive these supplies when the lockdown is lifted.

MCC also is partnering with Forum for Development, Culture and Dialogue (FDCD) to rebuild homes and re-establish businesses in Beirut. That work is temporarily paused until the lockdown is lifted.

Both PARD and FDCD are offering social and emotional support activities for children and adults who were traumatized by the explosion.

Darwish Issa’s extended family of nine, who had fled the violence in Syria within the past three years, was traumatized again by the explosion. The house where they were living was destroyed. His wife, Rajha Hajj Issa, was cooking when their building began to shake.

“I was terrified,” she said. “Even now, every time I hear the sound of an airplane or large noise, I feel scared.” Their children, 9 and 5, were affected psychologically too, she said. 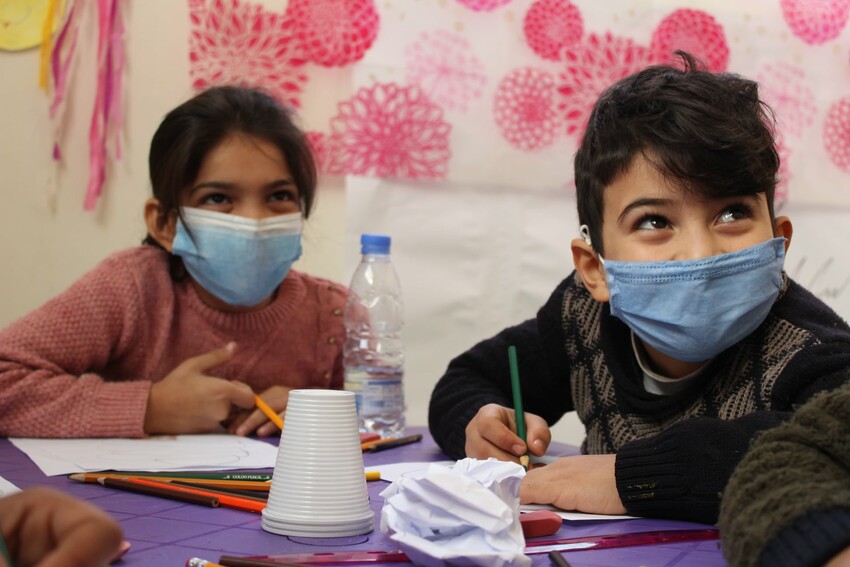 Caption for media: Hayat Mohammad, 10, and Ali al Sheikh, 11, participate in psychosocial activities sponsored by The Popular Aid for Relief and Development to help children deal with the trauma of the massive explosion in Beirut in August. Photo courtesy of PARD
More information: MCC partners Popular Aid for Relief and Development (PARD) and Forum for Development, Culture and Dialogue (FDCD) are both offering social and emotional support activities for children and adults who were traumatized by the August 4, 2020 explosion in Beirut, Lebanon.
Photo courtesy of PARD

Since the explosion, the family lives in an apartment with another family while Darwish Issa and his brother use an undamaged motorized tuk-tuk to gather and sell tin cans. With the money he gets from that work and the monthly food supplies from PARD, the family eats, but surgery for one child’s lip needs to be put on hold.

The needs that the MCC representatives see around them are extensive.

“At times we feel helpless and overwhelmed,” Garry Mayhew said. “But when we hear the stories of Maria, Zakaria and Darwish, we are reminded that even the smallest act of kindness can make a difference. This motivates us to press on, despite the challenges we face.”

You can help MCC provide food and other services by donating online at donate.mcccanada.ca/cause/lebanon-crisis, by calling (888) 622-6337 or by sending a check earmarked for “Beirut response” to MCC, 134 Plaza Drive, Winnipeg, MB, R3T 5K9.

MCC is grateful for the matching funds received from the Humanitarian Coalition and Global Affairs Canada through MCC’s account at Canadian Foodgrains Bank.

Mennonite Central Committee:  Relief, development and peace in the name of Christ