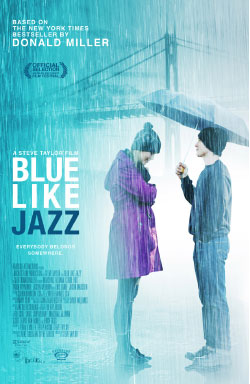 Donald Miller’s New York Times bestselling book Blue Like Jazz has finally* come to the big screen. Veteran rocker, new filmmaker, and director Steve Taylor has taken up the ambitious task of translating Miller’s book, which consists of a variety of essays, into a unified screenplay. Taylor’s bold storytelling techniques include off-colour humour, heavy satire of evangelical subculture, and more than a few four-letter words. Courageous, this is not. That said, Blue Like Jazz is a quirky, exuberant, and relevant story that seeks to portray the search for authentic Christian faith.

Blue Like Jazz is a coming of age story. A Southern Baptist youth flees his fundamentalist upbringing in Texas by going to Reed College, Portland, Ore. The school offers Don a vision of freedom coloured by booze, drugs, and weekend festivals. The rampant hedonism of campus life, alongside secular humanism in the classroom, causes Don to reassess his previously held beliefs – and the version of faith Don has received isn’t flexible enough to engage the intellectual climate of Reed College. So, Don takes his faith into the closet.

What Blue Like Jazz does well is portray the tension of being “in the world, but not of it.” The film also critiques some of the cultural trappings of evangelical Christianity (though it creates rather exaggerated depictions to do this). At its heart, the film seeks to address the reputation evangelical Christianity has in the wider culture, and it does so with a fair amount of self-awareness.

In the climactic scene, where Don sets up a confession booth on campus – not to take confessions, but to give them – a new apologetic is offered. He insists on being the one to confess his sin.

As a quirky comedy/satire, Blue Like Jazz mostly works; but to the extent that the film sketches an alternative vision of the Christian faith, it fails to deliver. Deconstruction is all too easy. That the church is full of hypocrites is hardly fresh revelation. The story relies on too many straw men, and plays up the familiar false dichotomies of fundamentalism vs. progressivism, liberty vs. licentiousness, Right vs. Left, and so on.

In this coming of age story, sadly, the protagonist never really comes of age. Don leaves legalism, but what new terrain has he entered? If neither the fundamentalism of his Southern Baptist roots, nor the liberalism of Reed College, what does authentic Christian faith look like?

Regrettably, Don’s conversion into a West-Coast, craft-beer-drinking, tall-bike-driving hipster is the main transformation depicted. The film’s subtext is essentially, “evangelical Christians can be cool too. We wanted you to know that. Also, we’re sorry for our fundamentalist forbears.”

In one of the key lines, Don offers, “Sometimes you have to watch somebody love something before you can love it yourself.” Unfortunately, the film doesn’t give viewers opportunity to watch somebody loving an authentic faith. The “confession booth” scene is as near as we get.

As someone who loved Blue Like Jazz the book, I can’t help but feel let down by Blue Like Jazz the film. However, the film isn’t without merit. It’s certainly an unusual film about the Christian faith, and I suspect many will resonate with it.

Perhaps the film’s greatest strength lies in its potential for stimulating conversation, especially for those who have been wounded by the church. There are many discussion points for thoughtful engagement.

For Donald Miller fans, Blue Like Jazz the movie is worth seeing for curiosity’s sake alone. For those unfamiliar with Miller’s writings, the film still holds some creative and theological value. For those looking to explore themes around crises of faith or the nature of true Christian freedom, there are better options. A film such as Babette’s Feast, though less hip, is more authentic.

*Note: The film was originally cancelled when one of the investors backed out, but a groundswell of popular support raised enough money through the Kickstarter website to
get it into production.

—Lance Odegard is a church planting apprentice with Artisan Vancouver.

Rumors of God: Experience the Kind of Faith...

Historical Attitudes That Have Shaped the Church’s use...