What's New
Through the conflict, life carries on in Ukraine
A FOCUS on Mission
Must Patience Be So Slow?
Harold Jantz: A Heart for the Mennonite Story
Lorlie Barkman: A Life of Creative Engagement
Last Days, First Days
Women in Ministry: Bertha Dyck
January Moment in Prayer “Holy Spirit—Fill Us!”
The Church as the Patient Body of Christ
Advent: Making Much of Jesus: Christmas Day
Home Arts & Culture Bible college’s history reflects Mennonite Brethren life in Canada

“A well-researched, thorough and comprehensive behind-the-scenes exploration of the creation, convictions, conflicts and controversies that shaped, encouraged and impeded the development and growth of MBBC. It will be of interest to former students–who will have missed most or all of the intrigue, controversy and conflict that occurred outside of the classrooms during their years at the College–along with others interested in the relationship between higher education and Christian faith, especially around issues related to interpreting the Bible and engaging the world.” 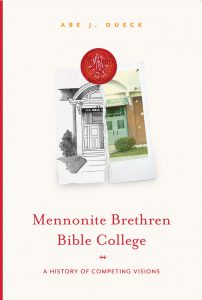 As a student at Mennonite Brethren Bible College in the late 1970s, the school was everything I hoped it might be.

For a young person beginning to find his way in life, it was the perfect environment to explore new ideas, challenge assumptions, become independent and grow in faith—all under the guidance of thoughtful and caring faculty.

It might have been a great place for students, but behind the scenes controversy and conflict was swirling about the vision, role and very existence of the College in the life of the Canadian Mennonite Brethren Conference.

Uncovering that hidden story is a goal of Mennonite Brethren Bible College: A History of Competing Visions by Abe Dueck.

The new book, made possible by support from the Mennonite Brethren Historical Commission, was launched online on June 17.

“The title sums up the MBBC story as one of push and pull, about what the College should be and what it should look like,” said Jon Isaak, director of the Centre for Mennonite Brethren Studies, in opening the event.

At the same time, he said, the idea of competing visions “is also the story of Mennonite Brethren in Canada, combining evangelical and Anabaptist impulses. Sometimes the two didn’t work well together.” 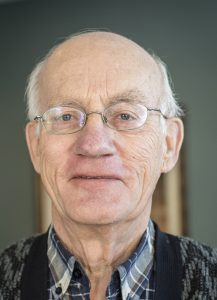 Dueck, who taught at the College for 23 years and was dean for 15 years, added that the book “is not just a history of MBBC,” but reflects the “broader life of the Mennonite Brethren conference in Canada.”

During its 48-year existence, from 1944-92, the College was at the centre of a debate about the role of education for Canadian Mennonite Brethren, he said.

This included tensions over the College’s role in promoting liberal arts in Christian education.

“The term “liberal” sometimes had negative connotations” for some people, said Dueck of how some viewed it with suspicion. The inclusion of liberal arts in the College’s curriculum was “an issue of dispute” for some in Canada—unlike for Mennonite Brethren in the U.S. who sent their youth to Tabor College.

Another issue facing the College was regionalism, both nationally as the demographic centre of the conference shifted from Manitoba to B.C., and provincially within Manitoba between people in rural areas who support Winkler Bible School and those who were more urban who promoted MBBC.

“There weren’t always the most positive of feelings” between those two groups, he said.

There was also competition over fundamentalism, evangelicalism and Anabaptism, he said, noting these were areas of dispute, conflict and tension and, sometimes, of “animosity.”

Another source of tension was the College’s music program, which was a source of pride for some as it rose in prominence in classical and choral circles in Manitoba and across Canada in the 1970s and 1980s. But it was also a sore point for others who saw it as being out of step with the rise of contemporary worship music in MB churches at that time.

In response to Dueck’s presentation, Cheryl Pauls, president of Canadian Mennonite University, and a former MBBC student, noted the story of the College is one of “tribute and lament”—tribute for what it achieved, including its impact through students and for how it persevered through challenges of many kinds.

Despite being gone, it is a “perennial flower” that keeps blooming at CMU, and its legacy “is engrained” at the university, she said.

For Dueck, writing the book was both immensely enjoyable as he relived the energy and excitement of his time at MBBC, but also difficult as he recalled the periods of tension and the “painful dissolution” of the school.

While the history of the College was one of “competing visions,” it also had a deep influence on Mennonite Brethren life in Canada, he said, and mirrored the tensions and competitions the Conference itself faced during its lifetime.

Tensions and competitions that I, as a student, thankfully missed.