What's New
Leading through the trauma of covid: Part two...
Ask God which town
Where to from here?
CCMBC National Director attends 2022 ICOMB Summit
MCC Canada and MCC Manitoba sell shared property...
The world appears to be growing darker
Sharing a new and unified language
6 reasons to attend the MWC Global Assembly...
One too many
Just one more
Home Arts & Culture A polarizing yet engaging witness

A polarizing yet engaging witness 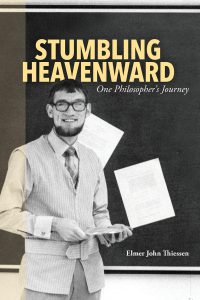 Here is a book you will find hard to put down. It is rich reading. It provides many insights and a good deal of highly engaging personal reflection. Former Medicine Hat College philosophy professor Elmer John Thiessen’s autobiography/memoir took me back to something I read years ago.

At a 1943 conference in southern Saskatchewan, Elmer’s grandfather Jacob Thiessen got up to express an urgent concern. The elder Thiessen was by this time in Vancouver, providing care to a home for Mennonite girls working as domestics and giving leadership to a small city Mennonite Brethren fellowship. His words to the Northern (Canadian) conference of churches was simple: keep your young people on the farm and out of the cities. This would be the best way to keep them safe in their faith.

A half century later one of his grandsons, Elmer, had already given the better part of his working career to teaching philosophy in a secular college, and another, Gordon Thiessen, had become the governor of the Bank of Canada. How could these gifted grandsons have travelled so far from the life their conservative grandfather might have envisioned?  Stumbling Heavenward provides some answers.

Few memoirs or biographies by writers in our circles give you the insight into a person’s life that this one does. And while Elmer’s life-path could hardly have been imagined by his devout and greatly admired grandfather, it turns out that the influence of the ancestor remained strong for Elmer throughout his career. To bring a Christian mind to any of the roles he had to fill, or to challenge them, always remained a core part of his identity.

Several circumstances defined Elmer’s life.  He was born with a harelip and cleft palate that took operations into his twenties to correct. The psychological impacts were deep. During his high school years his teacher father, also a devout believer in the grandfather’s mode, died. Elmer says he missed him “terribly,” perhaps the more so because for most of his years in school till then, he had known his father more as teacher than as parent. He says now he lacked maturity for his age. And when he entered university, an initial start in science shifted to philosophy. This came after three years at the MB Bible College in Winnipeg, where he gained a foundation that aided him lifelong and, more importantly, where he met the woman who would become his wife and partner, Maggie (Magdalene) Friesen.

Elmer made the choice of philosophy as study and career direction with a sense that it would take him on a “dangerous” path. Indeed, it brought much conflict into his life and in some respects even led to losses, but it also enabled him to make an outstanding contribution as a Christian academic.

Furthermore, throughout his life from the time of his baptism, he participated actively in the life of the church. He was a churchman at heart, though there too conflict seldom lay far away. A life of the mind seldom passes comfortably if one “believes in Truth with a capital T,” Elmer writes.  That is also a reason why his memoir is fascinating reading.

Because of the early success in his studies, Elmer was a given a Germany Exchange Scholarship the year of his wedding to Maggie, which allowed them to enjoy a “year-long honeymoon.” He even had money to buy a deluxe Volkswagen Beetle in Germany, enabling them to do a good deal of travelling in Europe alongside studies at the Goethe Institute and the University of Erlangen.  He also wrote an M.A. thesis on Kant’s Notion of God during that year.

After coming back, he was given a chance to teach as a sessional lecturer at Waterloo Lutheran University in someone else’s absence (at the invitation of Dr. Frank C. Peters, who was dean there at the time). He then began PhD studies at the University of Waterloo, and in 1971 landed a permanent position at Medicine Hat College in Alberta, where he remained for the rest of his fulltime career before retiring in 2003. In between he could take a number of sabbaticals. The Thiessens became parents to a daughter and two sons, and Maggie who taught in public schools at various times, often led in music and education in the church and clearly was a strong steadying influence for Elmer.

The story Elmer writes is a vivid reminder of how challenging it can be to be an outspoken Christian academic in a secular setting. Essentially it had to do with the desire to integrate his Christian faith with his academic work. Throughout his years in the classroom he embraced the challenge of facing students in classes such as history of western philosophy, political philosophy, logic, ethics, and at times ethics for specific groups like nurses or community workers. Sabbaticals, of which he had four, gave him opportunity to enrich his academic pursuits as well as teach elsewhere.

When he taught at Lithuania Christian College in 1993, Elmer writes that the time in Klaipeda was probably the most “invigorating teaching experience of [his] entire career.” It was for Maggie too who taught ESL to executives at the Klaipeda State Oil Terminal. The students they met there at that time were just emerging from the shadow of Soviet domination and both questioned and absorbed with great eagerness what they were being taught. It gave him a fresh appreciation for the meaning of indoctrination and assisted him in one of his major writing projects, a book he entitled The Ethics of Evangelism, A Philosophical Defense of Proselytizing and Persuasion [published by IVP Academic in 2011].

During his years of teaching at Medicine Hat College Elmer always kept his doors open for students to talk with him. That led to many meaningful conversations, at times about faith, and some with students who chose to put their faith in Christ because of his influence. Elmer had students who called him their favourite teacher or came to MHC because of him. Others resented his openness in declaring his faith, though he encouraged students to disagree and taught positions with which he disagreed. The book has many stories of the interactions he had with others, with students, some with other academics, many within his own family, some within the church. He often found himself a polarizing figure. He led a campaign to remove his college president. In the Crestwood MB Church he participated in an effort to remove a pastor. He clashed with a College dean who was also a member of his church. Some of the initiatives in which he participated he later came to regret. And he names people with whom he clashed. Yet, wherever he came, he invariably seems to have been given a leading role.

What a refreshing read Stumbling Heavenward is! Elmer has the humility to write about both his successes and failures. Clearly, throughout his life Elmer remained passionately open to God. He read the Bible for insights and direction for action for the issues he might be facing (though for some unexplained reason he never capitalizes “bible”). The positions he took were seldom simple nor were they easy.

After retirement from Medicine Hat College, the Thiessens moved to Waterloo, Ontario, where he they joined North Waterloo Mennonite Church and he could continue sessional teaching in several schools and he and Maggie could be close to most of their family.

Much more might be written about Stumbling Heavenward. It ought probably to have been two books, one about life in the family and the other a memoir about the life of a Christian philosopher. More care ought also have been given to the choice of a puzzling title, since it is the same one used earlier by an Edmonton pastor known to Elmer. Nonetheless, one can only applaud this stimulating and honest book.  Since it is likely that the print run was limited, it will probably not be in a bookstore near you. If you wish to order a copy, contact Dr. Thiessen directly at ejthiessen@sympatico.ca.

The Ethics of Evangelism

One of the problems with the repeated condemnations of proselytizing in this narrow sense [referring to the attempt to attract Christians from a particular church tradition to another church] is that this pejorative and narrow notion of proselytizing is invariably loaded with other nuances, which then make it easy to condemn proselytizing to sheep-stealing. For example, in a case study of a major ecumenical effort of evangelism in Russia, Nicastro concludes a discussion of definitions of proselytizing with a synthetic definition: “aggressive targeting and winning of converts from their (recognized) church to one’s own, especially through improper means.” In a study document of a Joint Working Group of the World Council of Churches and the Roman Catholic Church, the term “proselytism” is applied to “activities of Christians to win adherents from other Christian communities,” based on “unworthy motives” or done by “unjust means that violate the conscience of the human person.”

Definitions such as these simply confuse the matter. We need to separate the issue of trying to convert someone already belonging to a church, from the issue of unjust or improper means in doing so. Obviously the use of unjust or improper means such as coercion or distortion of other churches’ beliefs or practices is immoral. But is the attempt to convert someone when he or she already belongs to a church—is this immoral? The question needs to be treated separately. Most Christians, including evangelical Christians who are frequently the target of charges of proselytizing in this narrow sense, acknowledge the wrongness of unjust means of evangelism that violate the conscience of the human person. But is winning persons from other Christian communities in itself immoral?

From the introduction to Elmer Thiessen’s The Ethics of Evangelism, an IVP Academic publication, 2011.