What's New
Through the conflict, life carries on in Ukraine
A FOCUS on Mission
Must Patience Be So Slow?
Harold Jantz: A Heart for the Mennonite Story
Lorlie Barkman: A Life of Creative Engagement
Last Days, First Days
Women in Ministry: Bertha Dyck
January Moment in Prayer “Holy Spirit—Fill Us!”
The Church as the Patient Body of Christ
Advent: Making Much of Jesus: Christmas Day
Home News A new shepherd 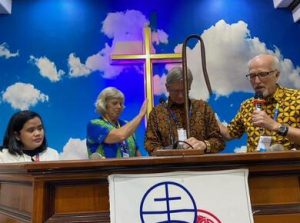 The shepherd’s staff was gifted to J. Nelson Kraybill in Pennsylvania by Calvin Greiner, a charismatic preacher who walked around the Assembly 16 host city praying. “After a number of trips, Calvin Greiner learned that the Mennonites were about to have an Assembly there, and that a Pennsylvania native would be installed as president. Then it made sense to him why God sent him to Harrisburg so often!” says J. Nelson Kraybill. Pictured: Hens Roesita Sara Dewi (Interpreter: English-Indonesian), Maria Hoffscholte Spoelder, Henk Stenvers, J. Nelson Kraybill. Photo: Nelson Okanya

The congregation of GITJ Margokerto hosted a dozen MWC guests for four days during Assembly. Margokerto was one of the first colonies founded by Dutch Mennonite missionary P.A. Jansz for the evangelization of the region.

Speakers for evening Assembly worship services were broadcast from a different satellite location each night to the main stage at STT Sangkakala in Salatiga, Indonesia, and to online viewers around the world.

Incoming president Henk Stenvers has served a decade as Deacons Commission secretary, during which he pioneered Online Prayer Hour and played a key role in the coronavirus task force. He has served Algemene Doopsgezinde Sociëteit (the Dutch Mennonite church) and the European Mennonites for almost 20 years.

“We wholeheartedly supported Henk in the past years to travel a lot and serve in MWC…[and] express our continuing support,” said Miekje Hoffscholte-Spoelder, current chair of Algemene Doopsgezinde Sociëteit. “We know that we are but a small part of Mennonite World Conference – a very interested part, however; with many projects and friendships in other countries.”

“Our global church is deeply grateful for the ministry of Nelson Kraybill during these seven years,” says César García, MWC general secretary. “We will miss his pastoral heart, wisdom and willingness to serve unconditionally.”

“Henk’s experience as a church leader in The Netherlands and his knowledge of the world church will be a great blessing in the years to come. It will be a privilege to work with him.”