What's New
A FOCUS on Mission
Must Patience Be So Slow?
Harold Jantz: A Heart for the Mennonite Story
Lorlie Barkman: A Life of Creative Engagement
Last Days, First Days
Women in Ministry: Bertha Dyck
January Moment in Prayer “Holy Spirit—Fill Us!”
The Church as the Patient Body of Christ
Advent: Making Much of Jesus: Christmas Day
Advent: Making Much of Jesus: Fourth Advent
Home MB HeraldFeatures A mennonite heart for refugees

A mennonite heart for refugees

As a young man John Wieler gave his heart to the Lord and wondered what the Lord truly wanted of him. Nearly a century later, he is still racing after the Lord’s leading.

“I’m very conscious that I asked the Lord to lead me and He has lead me,” Wieler said. “And once you commit to this sort of thing, you don’t back out.”

Wieler has spent the better part of his life working with refugees all over the world and in Canada. From volunteering with MCC to working for the Canadian Immigration and Refugee Services Board here in Canada, Wieler followed the Lord’s lead and his heart for people grew with each step.

It started on the trains in Winnipeg. In his young twenties Wieler was injured and booted off the farm. He needed work and took what he was offered. The Canadian Pacific Railroad, or at that time the Canada Colonization Association, offered him a job looking after the office.

It was this very association which helped many Mennonites come to Canada and resettle in the early 20s, people like Wieler’s parents and grandparents.

“If we’re going to talk about refugees, well, they were refugees,” said Wieler.

Wieler’s grandmother was a widow at the time of the revolution and he remembers her telling him, if it had not been for the help of the Mennonite brothers in America, she would not have made it. This story left a burden on Wieler’s heart. 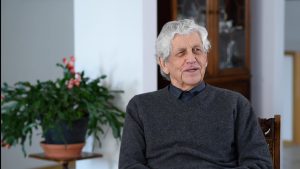 John Wieler in his home

He started at this agency at 22 years old and very quickly he was accompanying the trains. Wieler was sent all over Canada to meet refugees coming off the boats and bring them back across the rest of Canada.

“They were awful. They’re full of dirt. The cinders of those old steam engines would come in and crunch along there,” Wieler described his trips in the old cars. “Everybody in there for three days.. it was very, very uncomfortable.”

But despite the conditions of the trains, Wieler smiles as he tells about his time on the railways.

“I really enjoyed meeting a lot of people. They came from all over,” Wieler gleamed. “It was a really intense learning experience for me, which I didn’t realize at the time, because this was just an interlude.”

This small job that he took out of necessity, began a lifetime of work and passion for Wieler. Eventually refugees started coming on planes, and the trains were no longer needed. Wieler stepped into a number of unknown positions that molded his life impact on refugees.

“We didn’t know where we were going to go. I was not professionally trained,” recounted Wieler. “I felt very insecure, insufficient really. But the Lord said don’t worry.”

Wieler and his wife Betty followed the Lord’s leading all over the world with their four kids. They worked in Greece turning a demonstration farm into a research farm, they spent three years in Europe volunteering with MCC, and had opportunities locally in Winnipeg to support the journey of displaced people. 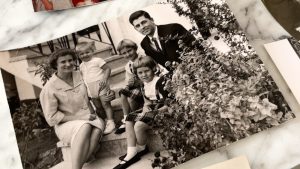 John Wieler and his family

“I worked in total, well it was over 20 years,” Wieler reflected on the many years he spent in working service. “Best years of my life in a way.”

The family settled in Winnipeg and had to reestablish themselves. They found their home at Portage Avenue MB in 1970 where Wieler took on the position of Coordinator of Refugees.

Even as he retired in 1996, Wieler’s heart for refugees pushed on. Among the many refugees Portage Ave has already helped bring to Canada, the church is currently working on bringing 8 more families to settle here.

“That has been a great blessing for the church,” said Wieler. “We have put in some money there but nobody has ever missed it.”

As many know, last Summer there was a disastrous development in Afghanistan and millions of people have been forced to flee their homes. Christians especially are very vulnerable right now as converting to Christianity is punishable by death.

When asked how we respond to the current refugee crises, Wieler recalled where we as Mennonites have come from.

“The very fact that our people, especially as a church, has had that experience in their background. That they understand what it means to be a refugee. What it means to be resettled. What it means to pick up on a new life. But even more so the terror and the upheavals which was the reason for them leaving their home country. It’s something that has to be part of our giving back. A reason for a response.”

If you or your church are interested in supporting an Afghan Christian family of refugees, please send us an email at communications@mbchurches.ca and we will get you in touch with our partners at MCC.

You can hear more of John Wieler’s story in our video interview series here.