What's New
Through the conflict, life carries on in Ukraine
A FOCUS on Mission
Must Patience Be So Slow?
Harold Jantz: A Heart for the Mennonite Story
Lorlie Barkman: A Life of Creative Engagement
Last Days, First Days
Women in Ministry: Bertha Dyck
January Moment in Prayer “Holy Spirit—Fill Us!”
The Church as the Patient Body of Christ
Advent: Making Much of Jesus: Christmas Day
Home MB HeraldFeatures A faith unfaltered by time

A faith unfaltered by time 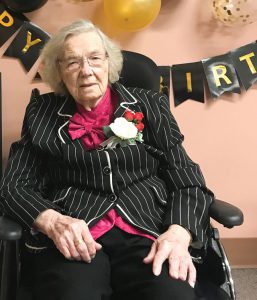 When Maria Loewen is asked how she managed to live to the age of 100, she has a one-word answer: “Gebet”—prayer.

Along with prayer, Loewen, who celebrated her centennial birthday on February 1, reads the Bible every day; she’s read through it several times.

“The disciplines of prayer and reading the Bible are very important to my mother,” says her daughter, Marianne Dulder.

This has been an example to her children and grandchildren, she adds, noting how she exemplified her Christian walk by “praying, studying God’s word, and attending church.”

At the same time, Maria—a member of North Kildonan Mennonite Brethren Church—“never pushed her faith on us or her grandchildren with lectures or condemnation, but lived a balanced life worth emulating,” she said.

Instead, she spoke about “a caring heavenly father” who was the “basis of how she perceived and lived her life.”

Born in 1921 in Russia to Johann and Katharina (Janzen) Sudermann, over her now 100 years of life Maria experienced many trying experiences—poverty, persecution, famine, war, refugee flight and other setbacks.

She experienced hunger in the 1920s during famine in Ukraine, and later saw her first husband of only one month taken away by the Soviets in 1941—never to be seen again.

She was also caught up in the fighting between the German and Soviet armies during the war before fleeing to safety in the west with the retreating German army—a terrible and terrifying trip—before being helped by Mennonite Central Committee to go to Paraguay when the war was over.

After remarrying Heinrich Loewen there in 1953, the couple and an infant daughter moved to Germany a year later where they lived for 18 years before immigrating to Canada with their four daughters.

Despite many hardships, heartaches and upheavals in her life, Maria never complained, Dulder said.

“Her way of dealing with all of that was not an entitled response of ‘Why me?’ but one of acceptance and even greater trust in God who she was certain cared for her and would take her safely into the future,” she said.

Through it all, she added, her mother “expressed reliance on the Lord.”

This included this past year, which was especially difficult as it became clear she needed to move into a personal care home.

“It was difficult for a 99-year-old to start over in new surroundings, away from family,” Dulder said.

The pandemic made it even harder, since visitors where limited and everyone wore masks that made communicating difficult. Several falls only made things harder.

“During these trying times, she proved her faith to us,” Dulder said. “Not once did her faith falter. In fact, it was the only thing left to her. A few times she expressed her wish ‘to go home,’ but then agreed that God would know when the time for her to go would be.”

Looking back at her mother’s life, Dulder said “she taught us all a very powerful lesson of never giving up despite scary circumstances. Her faith had been tested, like many times before, but she survived with her belief in God not only intact but strengthened.”

A love for Mennonite Central Committee

Over her life she always had a special place in her heart for MCC for help after the war and also for the food she received during the famine in the Ukraine.

“Mom lived during the famine years of the 1920s and knew hunger,” Dulder said. “She survived because of MCC’s help. She never forgot that, or the help she received again to find a new life after the war.”

She showed her gratitude by volunteering at an MCC thrift store in Winnipeg, well into her 90s.

“When it became hard to walk, she still volunteered, sitting in a chair, filling bags for customers,” Dulder said.

Along with volunteering at the thrift store for over 40 years, she also sewed many blankets for MCC.

“She wanted to give back,” said Dulder, adding she also had a soft spot for newcomers such as the refugee families sponsored by her church.

Now near the end of her life, Maria’s message is simple, Dulder shared: “Keep the faith, find strength in the God who created you and sustains you, love the people God has placed in your life, help where you can, forgive those who wrong you, don’t become bitter, take each day you have as a gift from God and fill it with the work He has given you.”

Maria’s daughters— Marianne Dulder, Elfie Janzen, Irene Dyck and Kathy Neufeld contributed to this article and give thanks to God for their mother.