What's New
Abortion, the image of God, and faithful witness...
Choosing motherhood: The sacrifice of honouring life
MWC Assembly small but full of joy
Bad back doesn’t hold back MDS volunteer
Transition in CCMBC National Faith and Life Leadership
Leading through the trauma of covid: Part three...
The church distracted: When the main thing is...
Remote wilderness rescue turns into service with MDS...
How open is your mind?
Following Jesus together across barriers
Home News A eulogy for dying churches

A eulogy for dying churches 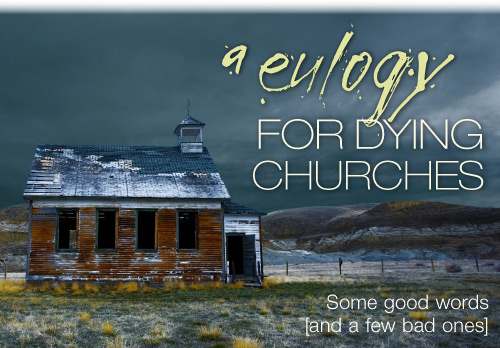 Some good words [and a few bad ones]

Despite their ages, the Aarons children are church vets. They’ve been there, done that. The wonder of the gospel seems lost on them, but not Leslie. She says, “I’m really glad I came. That whole Jesus thing is really interesting, isn’t it?”

The other two children can hardly believe their ears. “It ain’t beautiful,” pipes up May Belle, “it’s scary. Nailing holes right through somebody’s hand.”

Leslie silently ponders the juxtaposition between the message she heard, the songs she sung, and what she hears from her two new friends. Then she says, “You have to believe it, but you hate it. I don’t have to believe it, and I think it’s beautiful.”

Jess and May Belle Aarons are a metaphor for the dying church in North America. The church, God’s missionary, is to carry and embody the hope of the world that every neighbourhood child should have access to. But, in Canada and the United States that possibility and probability is waning as fellowships disband and “die.”

Eulogy means “good words.” What good words can be spoken over the masses – yes, masses – of dying churches across North America?

In The American Church in Crisis, David T. Olson observes that between 2000–2005, an average of 3,707 churches closed each year in the United States. During that same time an average of 4,009 new churches launched; a net gain of 303. These statistics appear hopeful, except for one not-so-small detail: the actual gain needed to keep up with population growth is 3,205 new church starts per year.

In Canada, the numbers are even less encouraging. The United Church of Canada, at one time the largest Protestant denomination in the nation with almost 7,500 local churches in 1927, now has about 3,400 and is closing one church a week. Since 1965, active church participation in United churches nationwide has gone from just over a million, to slightly more than 500,000.

Anabaptist churches have not seen that type of decline, but we are now beginning to feel the effects of being awash in a post-Christian culture. North American culture will inevitably chip away at the religious social fabric, which has, up to this point, served as a guard against the overall drift away from local church participation.

I once served in a denomination where one of the mother churches celebrated its final service before closing for good. It was a church that had done so much good, produced scads of missionaries and pastors, was known for her faithfulness, and was now no more. A credible neighbourhood witness of God’s good news in Christ had passed away. Surely this would only hinder the advance of the kingdom. Or would it?

The cemetery of church history is full of grave markers. Looking through the New Testament, we find cities that were incubators of the early church – the seedbeds of Scripture – but now fill a long list of ecclesiological obituaries. Ephesus, Colossae, the churches of Galatia – all these may yet have a small remnant of Christian believers, but for the most part the influence of these key Christian centres has gone the way of the dodo and they are now part of secular and Islamic Turkey. Who would have thought that in AD 425?

Speaking of which, the primary theological voices of the church in the second through fifth centuries were found in North Africa. Augustine exercised his influence from Hippo – no, not on the back of a large mammal – but the African city. Athanasius, who almost single-handedly saved orthodox Christianity from the Jesus-deconstructing heresy of Arianism (i.e. similar to today’s Jehovah’s Witnesses teaching) was also African. Today, of course, North Africa is the land of Islam, the locale of frontline and extremely patient and covert Christian life and mission.

Time to celebrate the past

So, what good words can be said about this? Plenty. Apart from the faithfulness of those churches in Galatia or North Africa – or other places that have fallen off the radar – you and I may never have had the opportunity to hear the good news. The Spirit used these churches for the glory of God and the charge against the gates of hell.

The shifting sands of time, political turmoil, and persecution can wreak havoc. A myriad of challenges can seemingly silence vibrant centres of Christian witness while becoming a source of gospel-pollination of more fertile territory through the wind of the Spirit – the story of Acts and the impact of the persecution of Anabaptists and Puritans standing as glorious examples.

So, we should accept that there is a time for everything under the sun and God is sovereign. Because the church is an organism, birth and death will be the norm.

Having said that, here is another sober morsel to chew on. A 2010 London Free Press article quoted a church leader saying, “We do have too many churches for the number of customers, to put it in purely secular terms.” No good word can be said about this. This leader is responding to the reality that aging buildings and pastoral salaries can’t be carried by the dwindling faithful.

Many denominations and local churches are feeling this pain. To stem the tide, or delay the inevitable, many will pursue a path of revisioning, rehiring, or rehearsing what once worked.

This generally does not work, and it’s not because the faithful are unfaithful. No, the reality is that in some cases, as in all of life, it’s sometimes better to let something die, celebrate what was once vibrant and used for the glory of God, and stop artificially propping up what should be eulogized.

Often, the life support afforded dying churches shows a deficiency in our modes of discipleship, which are rooted in half-baked ecclesiology and missiology that place too-high value on bricks and mortar and window-dressing. We assume if we can’t afford a building we’re no longer a church.

Or, we assume that keeping people comfortable is a spiritual value.

This is simply not true. One blogger notes, “Most congregations, no matter how sincerely they may claim to want to move from maintenance to mission, simply don’t.” So, in the end, even recognizing the problem will not necessarily breathe life.

Which leads to one more troubling thought: could it be that a church is dying because of spiritual unfaithfulness? The risen Jesus speaks to seven churches in Revelation 2–3 and to five threatens judgment. He says he will snuff out their light, remove his blessing, even war against them. The risen Lord seems to have a chip on his shoulder! He’s vehemently opposed to his people losing the plot.

Slipping into spiritual indifference and immorality, seeking their own welfare, leaving heresy unchallenged, all this is more than regrettable or simply the result of the shifting sands of time: it is sin. It must be repented of. Jesus has no eulogy to offer these fellowships. They will close. They are already dying. And, there is only one path toward resurrection: repentance.

This is a hard word we dare not shrug off. As multi-dimensional as the issues are, perhaps there is a time when we may simply need to repent. Repent of wanting life and church on our terms. Repent of comfort trumping vibrant mission. Repent of our love of the world, the heresies that make us feel smart, and the immoralities we justify.

This is a hard word, not a good one, but perhaps a necessary one as we embrace another generation of Leslies who need to hear that Jesus truly is beautiful.

One of those weeks

“To err is human; to forgive…”

The end of nice

Phil’s summary reveals for me just how difficult it is to pinpoint generalized reasons for church decline/death. Each instance is complex and should be reflected on as such – some to be celebrated, some to be lamented, and many a combination of the two, no doubt.