What's New
Leading through the trauma of covid: Part two...
Ask God which town
Where to from here?
CCMBC National Director attends 2022 ICOMB Summit
MCC Canada and MCC Manitoba sell shared property...
The world appears to be growing darker
Sharing a new and unified language
6 reasons to attend the MWC Global Assembly...
One too many
Just one more
Home News 2020 AGM Report

“2020 has caused us to ask deep questions about what we believe”, says outgoing CCMBC moderator, Bruce Enns. Enns has scribbled the words “What do I really believe about this gospel I’m proclaiming?” onto the page of his journal.

“I have taken this downtime to reflect as I flip through the pages of my old journals,” says Enns. On some pages, he has sketched the plans for an office chair, on other pages are his Yahtzee scorecards. And on a few pages, he has noted scripture verses that have shaped his views on what he believes is the call for the Church during this unprecedented time. Three vignettes surfaced as Enns reflected on his journal entries.

First, 2 Corinthians 1:8-11 reminds us that leaders must be at all times vulnerable: “We do not want you to be uninformed, brothers and sisters (v8)…this happened that we might not rely on ourselves but on God (v9)…On him we have set our hope (v10).” God is exposing our insecurities and false hopes and prompting his Church to put their faith in him. “You are adapting: Buildings are closed, but you are very much alive in this time because you have put your hope in God,” says Enns.

Second, Ephesians 5: 8-13 exposes an organization’s true motives. “Have nothing to do with the fruitless deeds of darkness, but rather expose them. It is shameful even to mention what the disobedient do in secret. But everything exposed by the light becomes visible—and everything that is illuminated becomes a light.” (v11-13)

Third, Jeremiah 6:16 demands that we stop—truly stop—and pay attention to what God is doing in our world. “Stand at the crossroads and look; ask for the ancient paths, ask where the good way is, and walk in it, and you will find rest for your souls. “God reveals our failings when we choose our own paths—Walk in faith and obedience.

Moving an annual general meeting online is not without its complexities: in order to hold a virtual AGM, CCMBC’s bylaws had to be amended. An approved motion granted the Executive Board authority to use referenda (as described in article 5, section 4 of the bylaws) to move decision-making on subsequent bylaw revisions to 2021 provincial conventions.

In his address, national director Elton DaSilva urged us to both “name our troubles” and to “return to ancient ways. “We need to take a long, hard look at ourselves and name our troubles,” says DaSilva, “only then can we rebuild. DaSilva described five phases CCMBC must undergo in returning to good health.

Phase one: shoring up is where we found ourselves over the last two years. The first phase is a time of observing, gathering data, and making adjustments. DaSilva noted that with the ending of the General Conference of Mennonite Brethren Churches of North America, and all the subsequent changes to governance style, the Canadian Conference has brought confusion to its polity. “For the last thirty years, our denomination has experienced a constant change in the area of governance. “Our churches lost the ability to identify and understand the polity of the MB Churches in Canada,” says DaSilva.

Phase two: demolishing involves eliminating, reducing, shifting, and exposing. The MB family has painfully walked through the demerger of Multiply, and the end of the print version of the MB Herald during our demolition stage. DaSilva compared the scaling back of the national office—programmatically, financially, and personnel—to tearing a house down to the studs.

Phase three: designing includes cost evaluation, consulting, drafting and brainstorming. DaSilva sees this as our current phase of development. Boards, teams, and staff in consultation with our churches are determining what is essential to the denomination in anticipation of rebuilding.

With the move to one stream funding and the onset of COVID-19, CCMBC has received approximately 64% of projected provincial donations. In response, cuts are being made and reviewed every ninety days to ensure that CCMBC ends 2020 with a balanced budget. Says DaSilva, “We look at the funds we have, adapt, and design accordingly.”

DaSilva forecasts that soon, the MB Church of Canada will enter phase four (building) followed by the fifth phase (living out). CCMBC has an unfortunate history of not sticking it out, Alinea Piche (Manitoba) observed. To which DaSilva replied, “We created too many things—services, resources, and programs—it’s time to identify what is important and commit to living in that space long-term.”

Legacy CEO, Jim Davidson and Finance and Audit Committee Chair, Howie Wall reported a $1.6 million deficit for CCMBC for the 2019 fiscal year. Primarily due to accounting costs associated with separating CCMBC and Legacy. “The reorganization impact as communicated at the October 2019 AGM through the Our Financial Story report exposed our stark financial reality,” says Davidson.

With the Finance and Audit Committee, Legacy and CCMBC leadership continue to examine internal spending and seek opportunities to replenish $480,000 of the accumulated ministry deficit. DaSilva committed to ending the 2020 fiscal year with a balanced budget. Reviewing partner subsidy support, increasing CCMBC Investments margins, and the sale of two CCMBC-owned properties in Alberta are three areas that CCMBC and Legacy look to balance in the 2020 budget.

Delegates expressed that MB culture, particularly its relation to stewardship, should be proactive rather than reactionary. “Members of the MB family should see themselves as owners, not donors,” says DaSilva, “Ownership is evident in participation. We need everyone to get involved.”

This year’s AGM had participation from 32% of Mennonite Brethren Churches across Canada (76 out 235).

For such a time as this

“Our gratitude is an expression of our trust in God’s provision,” says Karen West (Ontario rep to the Executive Board) expressing thanks to outgoing board members. “For the past four years, Bruce Enns has served our family of churches in the role of assistant moderator and moderator. Bruce has led with wisdom, strength, courage, love, humility, and grace. He has worked hard to maintain unity and alignment among our boards, staff, and agencies.”

The moderator position is being passed on to Ron Penner, who God has appointed for such a time as this. “As an MB family, we have great potential and great capacity,” says Penner. “Just like the church in Acts 15, we are a dynamic and complex group. Collaboration is a great goal and process. We will need to figure out how to keep communicating and tussling with one another, seeking clarity and how to hold each other accountable. We are well on our way to becoming a collaborative organization and church.” 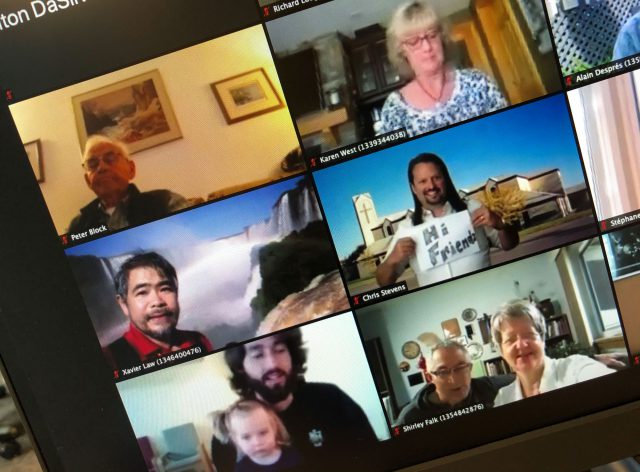 “What is God calling us to?” DaSilva asks, echoing Bruce Enns’ wonderings from the previous evening. “For many years, the Evangelical North American church has hinged its mission on church planting. We want to shift discipleship to the forefront. Discipleship is the direction in which the National Ministry Team (NMT) is moving in.”

In his report, NMT member and Multiply president Randy Friesen said the words “stop, wait and listen” have guided Multiply through a difficult season. Historically, Multiply operated at an arm’s length from CCMBC. The formation of the NMT has helped bridge this gap, emphasizing shared vision, mission, and strategy. As a result, Multiply is pressing pause on developing its strategic plan until the Collaborative Model is fully operational. Multiply anticipates a $250,000 surplus in their 2020 operating budget. However, one-time transition costs related to the demerger of approximately $950,000 means the total anticipated deficit for the fiscal year is closer to $700,000. Friesen expressed his gratitude to this family of churches for their support and prayers this past year.

“We live in a mix of turmoil and uncertainty, but also a deep assurance of God’s hope,” says MB Seminary president Mark Wessner. “This past year has been one of both blessings and difficulty.”

MB seminary’s financial struggle demands significant changes be made to areas of operations, administration, and personnel. Currently, the seminary partners with post-secondary institutions in Saskatchewan (Horizon College), Manitoba (CMU), and Ontario (Tyndale). Wessner emphasized that many details around the impacts of restructuring, particularly in the province of Manitoba, are not ready to be communicated yet, as many of those conversations are ongoing.

“The mandate of MB Seminary has always been national, but realistically, it has played out regionally,” says Wessner. Working strategically with the provinces will be a crucial component of MB Seminary’s restructuring process. Wessner stresses that his inclusion in the NMT allows MB Seminary the opportunity to do that effectively.

As The AGM concluded, Enns made a final plea to delegates: “Churches, get involved. Step forward, lean in, and extend help. Speak the truth in a posture of love. Pray for the National Ministry Team, for boards, and for Elton. Encourage those who lead.”