What's New
Through the conflict, life carries on in Ukraine
A FOCUS on Mission
Must Patience Be So Slow?
Harold Jantz: A Heart for the Mennonite Story
Lorlie Barkman: A Life of Creative Engagement
Last Days, First Days
Women in Ministry: Bertha Dyck
January Moment in Prayer “Holy Spirit—Fill Us!”
The Church as the Patient Body of Christ
Advent: Making Much of Jesus: Christmas Day
Home William (Bill) Lepp 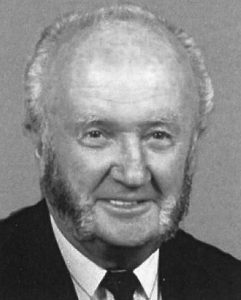 Growing up on the farm, Bill developed a strong work ethic at an early age. He started school in Osterwick, continued his education in Manitou, and completed Grade 8 in Purvis, Man. Bill moved to Winnipeg in 1944 to work for Canada Packers. He attended South End MB (now Portage Avenue), where he met Agnes. After their wedding, they returned to the Cartwright and Killarney area to farm for 25 years. Bill test-drove a career selling cars in Killarney. The family left the farm in 1971. Bill managed a car wash and gas station until he became a manager at the Steinbach (Man.) Southeastern Agricultural Employment office in 1974. The family moved to Steinbach the following year. When the office closed, he retired at 70. Bill helped plan and build the Fernwood Place seniors complex and received a Community Recognition Award for his work on the board. He was involved in the Mitchell and Area Seniors Club. Together with Aggie, he enjoyed camping, wintering in Arizona, and visiting their children. When Aggie was unwell, Bill was dedicated to her care until she transitioned to personal care; he never left her side. They spent their last five months together at Rest Haven Nursing Home, Steinbach. Bill prayed daily for every member of his family. He had a wacky sense of humour. He met every challenge with a positivity shaped by his unfailing faith in Jesus.