What's New
Through the conflict, life carries on in Ukraine
A FOCUS on Mission
Must Patience Be So Slow?
Harold Jantz: A Heart for the Mennonite Story
Lorlie Barkman: A Life of Creative Engagement
Last Days, First Days
Women in Ministry: Bertha Dyck
January Moment in Prayer “Holy Spirit—Fill Us!”
The Church as the Patient Body of Christ
Advent: Making Much of Jesus: Christmas Day
Home Werner Falk 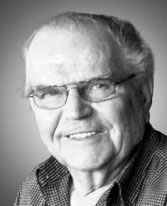 When Werner was 6, his family moved to B.C., settling first in Black Creek, then in Arnold, where he met Margaret. Werner was a teacher, and later, a social worker. He enjoyed riding motorcycle, playing organ, fishing, oil painting and writing. He started a woodcarving club, which became Central Fraser Valley Woodcarvers. Whenever he could, he helped his children around their homes. Werner and Margaret served on Bakerview’s catering committee, in the seniors’ choir and as deacons. Werner led a seniors’ Bible study and started a seniors’ program at Bakerview. He retired in 1988 but continued to work part-time as an adoption study worker and volunteered at MCC. He organized seniors’ bus tours to the theatre in Chemainus, B.C.