What's New
A FOCUS on Mission
Must Patience Be So Slow?
Harold Jantz: A Heart for the Mennonite Story
Lorlie Barkman: A Life of Creative Engagement
Last Days, First Days
Women in Ministry: Bertha Dyck
January Moment in Prayer “Holy Spirit—Fill Us!”
The Church as the Patient Body of Christ
Advent: Making Much of Jesus: Christmas Day
Advent: Making Much of Jesus: Fourth Advent
Home Walter James Thiessen 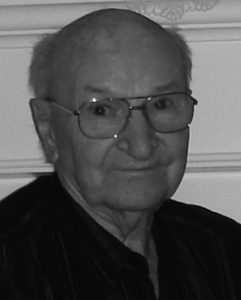 Walter grew up on a farm near Greenfarm, Sask. He attended Herbert Bible School and a year of auto body mechanic training in Moose Jaw, Sask. While he and Wilma were teaching in separate remote towns, he mailed her an engagement ring. The music at their reception was Adolph Pauls on a musical saw. In Saskatoon, Walter worked at Early Motors. He moved to Merlin Motors Parts Department, advancing to parts manager and remaining until his retirement at 65. Cars were his passion: he could identify every make and model. He filled Wayne and Wyn’s childhood with fun and love. With their grandchildren, Walter and Wilma visited parks, played board games, drew pictures and watched hockey. Walter served the church as usher, greeter and PA system manager. Walter and Wilma took bus trips and cruises with their siblings. They travelled Germany and Russia to see ancestral sites. In the 2000s, Walter and Wilma moved to a condo where they enjoyed Bible studies, games nights and potlucks. When Wilma’s health declined, Walter cared for her. His commitment, patience and love was evident daily. After Wilma died, he set a weekly routine of restaurant meals and social events with old and new friends. Walter could make anyone feel at home.