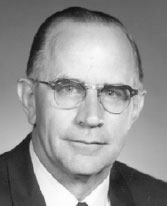 Waldo was demoted a grade below his twin brother and given to believe he wouldn’t succeed. He worked on a farm after giving up on school in Grade 8. He graduated from Hillsboro (Kan.) High School as ceremony emcee, and went on to earn an MDiv from Central Baptist Seminary, Kansas City. While teaching at Tabor, Waldo married the school librarian, Rachel. He was called to the pastorate on return from teaching 2 years in the Chaco. Waldo served the MB conference as chair of the board of general welfare and public relations (1957–66), chair of the board of missions and services (1966–75), as chair and vice-chair of U.S. committee of reference and council for 7 years, and as officer and member of the Southern District and Pacific District committees 29 years. He pastored 10 years in Hillsboro, Kan., and 6 in Reedley, Cal. Waldo delivered the Sunday morning sermon at 2 Mennonite World Conference assemblies. He taught at MBBS, Fresno, Cal., retiring in 1987. Waldo’s class on Christian disciplines was so popular, students requested it become compulsory. His student David Wiebe edited the class notes into Journey into Spiritual Growth in 1980, and another student Herb Kopp prepared the manual Deacons and their Ministry. Waldo always left the porch light on in case someone from church dropped by.