What's New
Through the conflict, life carries on in Ukraine
A FOCUS on Mission
Must Patience Be So Slow?
Harold Jantz: A Heart for the Mennonite Story
Lorlie Barkman: A Life of Creative Engagement
Last Days, First Days
Women in Ministry: Bertha Dyck
January Moment in Prayer “Holy Spirit—Fill Us!”
The Church as the Patient Body of Christ
Advent: Making Much of Jesus: Christmas Day
Home Victor Hildebrand 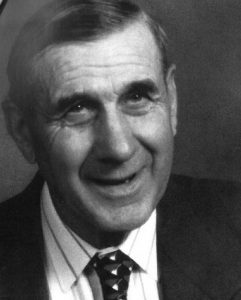 When Victor was 1, his family immigrated to Canada, settling in Reesor, Ont., for 5 years, then in Grassy Lake, Alta. He found school difficult at first because he knew no English. In 1935, his father died of acute appendicitis. Being the oldest, Victor had to take on more responsibilities than most 11-year-olds. Even during those hard times, his faith was important to him. He went to Coaldale (Alta.) Bible School. After he and Anna married, they farmed until retiring to Coaldale in 1989. Victor sang and played violin with the Chapel Singers for years until health wouldn’t allow it. Anna was admitted to Coaldale Health Centre in 2000; Victor faithfully visited her and did his own cooking and baking. After his health deteriorated, he moved to Sunny South Lodge in 2012. When he began needing dialysis in 2015, he moved to St. Therese Villa in Lethbridge, Alta. Victor knew the God who holds the future. He was ready to go to his eternal home.