What's New
A matter of love: Reframing abortion
“Any chance you might be expecting a goldfish?”
Abortion, the image of God, and faithful witness...
Choosing motherhood: The sacrifice of honouring life
MWC Assembly small but full of joy
Bad back doesn’t hold back MDS volunteer
Transition in CCMBC National Faith and Life Leadership
Leading through the trauma of covid: Part three...
The church distracted: When the main thing is...
Remote wilderness rescue turns into service with MDS...
Home Theodore (Ted) Jacob Goossen 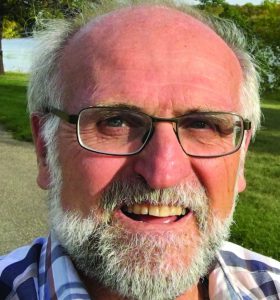 Nurtured in the faith by his parents, Ted accepted Jesus as Saviour at 5 and was baptized while attending Winkler (Man.) Bible Institute. After graduating from University of Manitoba, he married Mary. Feeling called to ministry, he enrolled at Providence Theological Seminary, Otterburne, Man., earning an MDiv in 1975 and becoming director of Winkler Bible Camp. He was ordained in Winkler MB Church in 1983. Ted and Mary were called to serve Grace MB Church and Simonhouse Bible Camp, Cranberry Portage, Man., in 1985. After 14 years at Simonhouse, Ted became Winkler MB Church’s associate pastor. Their 21-year-old son Joshua died tragically in 2001. The following year, Ted resigned and fulfilled a lifelong dream by working 2 years as a long-haul trucker. Ministry was never far from his heart; in 2005, he returned to northern Manitoba to pastor Thompson Christian Centre Fellowship for 10 years. After 40 years of distinguished ministry, Ted and Mary retired to Saskatoon, near 2 of their married daughters. Ted’s retirement consisted of playing with his grandchildren, cycling and playing pickleball, ushering at Forest Grove MB Church, preaching in area churches, and volunteering in a hospice. In January 2019, Ted was diagnosed with cancer in his brain and spine. His decline was swift; 2 months later, he died peacefully at home. Ted’s exuberance and love for people and his Lord profoundly affected those who knew him. Ted loved the MB conference, serving under the church extension umbrella in northern Manitoba 24 years.