What's New
Through the conflict, life carries on in Ukraine
A FOCUS on Mission
Must Patience Be So Slow?
Harold Jantz: A Heart for the Mennonite Story
Lorlie Barkman: A Life of Creative Engagement
Last Days, First Days
Women in Ministry: Bertha Dyck
January Moment in Prayer “Holy Spirit—Fill Us!”
The Church as the Patient Body of Christ
Advent: Making Much of Jesus: Christmas Day
Home Theodor Hintz 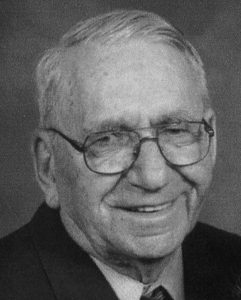 Ted’s family lived in the Scapa area of Alberta until he was 15, then moved to Endiang District, where they continued ranching and farming. The family was active in the Lutheran Church, and their door was always open to the ministers. They enjoyed animals and fostered good family relationships. Ted married Dorothy. She had 2 children. Ted farmed while she taught school. In 1976, they moved to B.C., where Ted worked for Okanagan Manufacturers. Ted and Dorothy were involved with Youth with a Mission in Hawaii. In Chico, Cal., they connected with Gleaners for the Hungry. Their training in the U.S. led them to form a prayer group. Out of their concern for the hungry, Ted, Dorothy, and 6 others made Okanagan Gleaners a reality. Ted and Dorothy lived in Penticton, B.C., 1976–2008, then in Abbotsford, B.C., closer to their daughter. Due to health issues, they moved to Menno Home, Abbotsford. After Dorothy died following a long struggle with dementia, Ted was lonely. His health also declined, especially after several major surgeries. Ted was known for his cheerful and outgoing nature. Through hard times, he kept a strong faith in God and drew strength from reading Scripture.