What's New
A FOCUS on Mission
Must Patience Be So Slow?
Harold Jantz: A Heart for the Mennonite Story
Lorlie Barkman: A Life of Creative Engagement
Last Days, First Days
Women in Ministry: Bertha Dyck
January Moment in Prayer “Holy Spirit—Fill Us!”
The Church as the Patient Body of Christ
Advent: Making Much of Jesus: Christmas Day
Advent: Making Much of Jesus: Fourth Advent
Home Thelma Villeseche 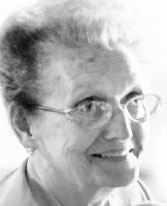 Thelma’s family moved to St. Catharines, Ont., when she was 17. She met Rusty in 1949, when he visited his brother. Thelma and Rusty travelled frequently together. They accepted Jesus as their Saviour, and in 1974, were baptized into Grantham MB Church. When Rusty died, Thelma was heartbroken. She moved to Tabor Manor in 2007. Her health deteriorated until her death.