What's New
A FOCUS on Mission
Must Patience Be So Slow?
Harold Jantz: A Heart for the Mennonite Story
Lorlie Barkman: A Life of Creative Engagement
Last Days, First Days
Women in Ministry: Bertha Dyck
January Moment in Prayer “Holy Spirit—Fill Us!”
The Church as the Patient Body of Christ
Advent: Making Much of Jesus: Christmas Day
Advent: Making Much of Jesus: Fourth Advent
Home Stella Reimer 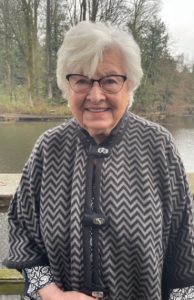 Seeking work, Stella’s family moved often – 13 times in one year – including to Wingard and Carlton, Sask.; Kronsgart, Purvis, and Crystal City, Man. Because churches were far away, families worshipped in neighbouring homes. At one such meeting, with guest speaker Henry Schumacher, 14-year-old Stella received Jesus as Saviour. In 1943, Stella attended a semester at Winkler (Man.) Bible Institute. Despite only having a Grade 5 education, Stella was knowledgeable, an avid reader who kept a journal for 50 years. In 1944, after the family moved to B.C., Stella worked in a fish cannery in Steveston. In Clearbrook, Stella could finally attend church regularly. In 1947, she met Peter Reimer at an evangelistic meeting at Mennonite Educational Institute. They married in 1948 and moved to a Matsqui Prairie dairy farm, living in a transformed granary. That same year, the farm flooded. Peter built them a new house in 1955. Stella loved to sing harmony with her children and was known for baking rhubarb platz and fruit pies for her family. She learned to drive in 1957 and kept busy taking her children to the roller rink and beach. At Matsqui (B.C.) MB Church, Stella taught vacation Bible school. Stella did childcare, housekeeping, and the night shift at the fruit cannery; after her children were in school, she worked at Golden Valley, Eaton’s, and Tru-fit Shoes. She enjoyed participating in a care group and the Jubilee Singers choir at Central Heights MB Church, Abbotsford. Stella and Peter sold the farm in 1978, moved to Clearbrook, bought a camper van, and travelled across North America. In 1993, they transferred their membership to Clearbrook MB Church. When she was unable to care for Peter at home, Stella visited him daily at Sherwood Home. After his death, she had coffee weekly with her cousins Betty, Tina, Anne, and Helen. In 2016, she moved to Tabor Court, where she made many friends over puzzles. At 92, to her great joy, she led a soul to Christ. Her greatest desire was that her family follow Jesus. Stella became ill suddenly and died surrounded by family.