What's New
Multiply September Ukraine Updates
Volunteers in B.C. honour Leamington woman tragically killed...
Delete or not to delete, that is the...
Believers bring water for drought baptism
Encouragement to those in the arena
Keeping attention and making an impact: A few...
Open hands to reconciliation
From the editor
Approaching truth and reconciliation with love in our...
MB Seminary offers new MA in Transformational Leadership...
Home Ruth Elsie (Grieger) Regehr 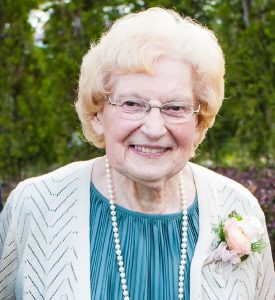 Elsie gave her life to Jesus as a teenager. After business college, she worked as a bookkeeper at Canadian Co-operative Implements and General Motors Acceptance Corporation (GMAC). She attended Pacific Bible Institute (now Fresno Pacific University), Fresno, Cal., for a year. While studying at MB Bible College, Winnipeg, she met the love of her life, John. They married and had four children. In 1966, they moved to Carman, Man., where John began his medical practice. Elsie was a stay-at-home mom who loved providing a godly, caring home. There was always room at the table and plenty of wonderful food. An avid gardener, she took special satisfaction when her yard won “Yard of the Month” for the town of Carman. Elsie devoted her time to her family, supporting their school and church activities. She volunteered as a Pioneer Girls club leader, ladies fellowship leader, Sunday school teacher, and choir member. Music was a big part of her life; she played piano at home while the family played their instruments. She lent her administrative and organizational skills to the school as president of the Band Booster Association. She made many lifelong friends in Carman and enjoyed their fellowship and support, remembering those good memories often. Elsie enjoyed many family camping trips to the Alberta Rockies and outings to local lakes. The family took two major trips: a road trip from Manitoba to California and a medical mission in the Dominican Republic. Elsie and John also visited Hawaii, Alaska, and Europe. After they moved to Calgary, she continued to enjoy gardening and trips to the mountains. Elsie suffered a cardiac arrest and underwent a successful open-heart surgery. God granted her 6 more years. With her changing health and John’s retirement, they relocated to an acreage in Abbotsford, B.C., to live with son Tim and Michele. Elsie’s health began to fail again, but she was granted one more grace from God. The family celebrated Elsie and John’s 60th anniversary Aug. 20–21, 2021. At 10 pm Aug. 21, she entered hospital and, after saying goodbye to each family member through the miracle of technology, Elsie died on their anniversary date.