What's New
A FOCUS on Mission
Must Patience Be So Slow?
Harold Jantz: A Heart for the Mennonite Story
Lorlie Barkman: A Life of Creative Engagement
Last Days, First Days
Women in Ministry: Bertha Dyck
January Moment in Prayer “Holy Spirit—Fill Us!”
The Church as the Patient Body of Christ
Advent: Making Much of Jesus: Christmas Day
Advent: Making Much of Jesus: Fourth Advent
Home Peter Loewen 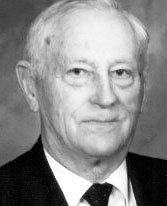 During the Depression, Peter stayed home to help his parents. 1942–1945, he was stationed at the Jasper and Kananaskis Forestry Service in Alberta. In 1954, Peter and Hilda committed their lives to the Lord and were baptized into Dalmeny (Sask.) MB Church. Peter served as Sunday school teacher, usher, on church committees, as school board member, and housing board member. He was deputy returning officer for federal and provincial elections for 25 years. After 33 years on the farm, Hilda and Peter moved into Dalmeny, hoping to take life easier; however, the Dalmeny Funeral Home requested his help. He assisted both the Dalmeny and Rosthern Funeral Homes for 20 years until his health forced him to retire. In 2003, Peter and Hilda moved to Central Place, Saskatoon, where he remained after Hilda’s death in 2005.