What's New
Multiply September Ukraine Updates
Volunteers in B.C. honour Leamington woman tragically killed...
Delete or not to delete, that is the...
Believers bring water for drought baptism
Encouragement to those in the arena
Keeping attention and making an impact: A few...
Open hands to reconciliation
From the editor
Approaching truth and reconciliation with love in our...
MB Seminary offers new MA in Transformational Leadership...
Home Peter John Suderman 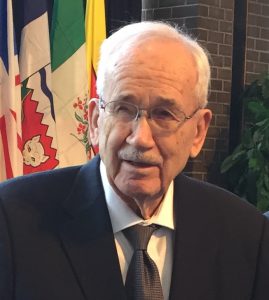 Peter was born in a sod house in Pilot Butte, Sask., but grew up in Regina. Growing up during the depression was tough, but he loved to tell stories of his adventures as a boy. He was a hard worker, selling newspapers on the street corner, delivering groceries on his bicycle, and doing accounting at City Dairy. When his father was ready to sell his electrical business in 1954, Peter was ready to take on the challenge of business ownership. He grew Globe Electric from residential to commercial and industrial contracting and was a respected member of the business community. Peter developed an electrical estimating course, travelling across Canada teaching hundreds of contractors until he was 75. Athletics played a big part in Peter’s life, whether taking on 10 of his Sunday school class boys on a hockey rink or playing competitive volleyball and racquetball. Most Saturday mornings, you could find him on the course honing his golf game, winning many trophies. With a strong faith in God, Peter was always ready to share his faith. He was a committed member of Parliament Community Church, serving in multiple roles and volunteering many hours. He was instrumental in creating the Saskatchewan Prayer Breakfast, working closely with the Lieutenant Governor from 1971 until retiring from the committee in 2017. He spent many hours with Christian Business Men’s Connection, Athletes in Action, and the Regina male voice choir. He was a member of the Regina Electrical Contractors Association. Later, he delivered Meals on Wheels. His volunteerism was recognized with the Queen Elizabeth II Diamond Jubilee Medal in 2012 and the Sovereign’s Medal for Volunteers in 2017. Peter married Martha Wieler in 1948 and enjoyed 64 years of marriage. They had 4 children and family was a great source of joy. Peter and Martha built a loving home. They often hosted guests for a meal and offered a helping hand to those in need. Peter left an indelible mark on many lives, always encouraging them to love and serve God, love family, work hard, and be honest.