What's New
Through the conflict, life carries on in Ukraine
A FOCUS on Mission
Must Patience Be So Slow?
Harold Jantz: A Heart for the Mennonite Story
Lorlie Barkman: A Life of Creative Engagement
Last Days, First Days
Women in Ministry: Bertha Dyck
January Moment in Prayer “Holy Spirit—Fill Us!”
The Church as the Patient Body of Christ
Advent: Making Much of Jesus: Christmas Day
Home Peter Isaak 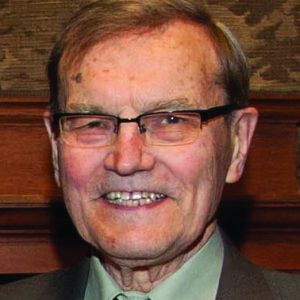 Peter was the last child born to a farming family of 12. In 1942, he and his mother moved to Winnipeg where he finished junior high at Lord Kitchener School and high school at Mennonite Brethren Collegiate Institute. After one year at MB Bible College, Peter finished a BA at United College (now University of Winnipeg). After marrying his high school sweetheart Hildegard, he landed a teaching job at West Kildonan Collegiate Institute in 1957. Peter finished a BEd in 1959 at the University of Manitoba, studying during the summers and continuing to teach. Always wanting to keep learning, he applied for and won a National Science Foundation stipend to study mathematics at Rutgers State University in New Jersey for the 1965–1966 academic year. That year, together with more graduate studies at U of M, earned him an MA in educational administration. Peter will be remembered for his strong leadership in education, first as a math teacher and then as principal at West Kildonan Collegiate and West St. Paul School. After 30 years with Seven Oaks School Division, he retired and found joy helping organize the Good Neighbours Active Living Centre in East Kildonan. At McIvor Avenue MB Church, Winnipeg, Peter and Hildegard were charter members. He loved church. He taught adult Sunday School and helped plan monthly seniors’ meetings. Peter’s life of service was grounded in his Mennonite heritage and faith. The family cherishes his memory as a man of faith, family, and service.