What's New
Through the conflict, life carries on in Ukraine
A FOCUS on Mission
Must Patience Be So Slow?
Harold Jantz: A Heart for the Mennonite Story
Lorlie Barkman: A Life of Creative Engagement
Last Days, First Days
Women in Ministry: Bertha Dyck
January Moment in Prayer “Holy Spirit—Fill Us!”
The Church as the Patient Body of Christ
Advent: Making Much of Jesus: Christmas Day
Home Peggy Jane Unruh Regehr 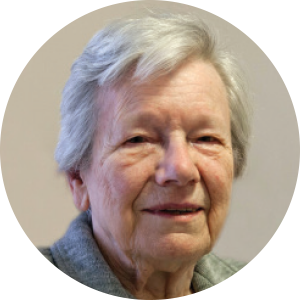 Peggy’s parents became missionaries in India in 1935. Alongside her sister Kay, Peggy entered boarding school, a painful time punctuated by fond reunions with their parents. In 1942, with the threat of a Japanese invasion, the family left for Winkler, spending 3 happy years with extended family. When the family returned to India, Peggy and Kay remained to finish high school, but missed a sense of home. The sisters headed to Tabor College, Hillsboro, Kan. Peggy was grateful for the opportunity to attend college, where she saw women leading in a church institution for the first time. She returned to Winkler to teach high school. In Winnipeg, she met fellow summer student, Walter. When they married and moved to rural Manitoba, Peggy had her dream of a home. Later, in Winnipeg, Peggy found a wider circle of friendships and took on leadership in the women’s groups at church. In a time when women’s roles were circumscribed, she longed to exercise her leadership gifts in the wider church. She found joy in collecting plants, books, and recorder music, and later also in weaving and genealogy. When Peggy’s parents retired in 1967, they moved around the corner, fostering a connection after years across the globe. After discovering feminist theology, in the 1970s, Peggy studied theology and Bible at MB Bible College, where she enjoyed deeply considering the place of women in the biblical narrative and the church. The first MCC Canada staff person for women’s concerns, Peggy travelled the country speaking to women about family violence. Peggy died after a 15-year journey with Alzheimer’s disease. Her final home, Actionmarguerite, Winnipeg, was a place of sunlight and love.