What's New
Through the conflict, life carries on in Ukraine
A FOCUS on Mission
Must Patience Be So Slow?
Harold Jantz: A Heart for the Mennonite Story
Lorlie Barkman: A Life of Creative Engagement
Last Days, First Days
Women in Ministry: Bertha Dyck
January Moment in Prayer “Holy Spirit—Fill Us!”
The Church as the Patient Body of Christ
Advent: Making Much of Jesus: Christmas Day
Home Nellie Rogalsky 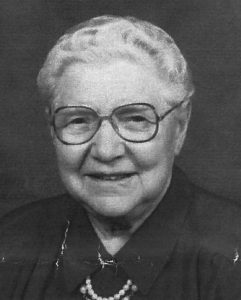 Nellie worked in the office of the collective until WWII. In 1941, her family was at the train station, about to be sent to Siberia, when the German front reached their village and they were free to return home. After the Germans took control, church services began again. In May 1942, Nellie gave her life to the Lord. Matthew 11:28–30 was especially meaningful. In 1943, her family fled, arriving in Warthegau, Poland, in 1944. Here, Nellie took a nursing course and worked in an office until the German Red Cross conscripted her as a nurse. In the confusion, Nellie ended up in Luneburg, Germany, separated from her family. With MCC’s help, she immigrated to Canada in 1948. Her mother’s cousin’s family in Chilliwack, B.C., became her family. Nellie’s parents and siblings were exiled to Asia. After 27 years of separation, Nellie found her mother and sister and helped them come to Canada in 1972. Nellie retired from the St. Paul’s Hospital physiotherapy department in 1984. Her later years included mission trips to Ukraine with Disciple Making International. She prayed faithfully for God’s Kingdom to grow in Ukraine. She contracted pneumonia in July 2016.