What's New
Through the conflict, life carries on in Ukraine
A FOCUS on Mission
Must Patience Be So Slow?
Harold Jantz: A Heart for the Mennonite Story
Lorlie Barkman: A Life of Creative Engagement
Last Days, First Days
Women in Ministry: Bertha Dyck
January Moment in Prayer “Holy Spirit—Fill Us!”
The Church as the Patient Body of Christ
Advent: Making Much of Jesus: Christmas Day
Home Menno Peter Isaac 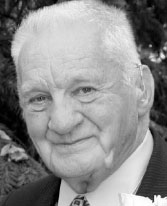 When Menno was 9, his mother died. He accepted Jesus in his teens. Menno worked at a lime plant in Agassiz, B.C., and met Kay in Greendale, B.C. They moved to Arnaud, Man., where he worked on the farm 3 years. After they returned to Greendale, Menno worked for Columbia Paving, then was a driver 9 years for Dueck’s Lumberyard, Chilliwack, B.C. The family farmed in Alexander, Man., then in Souris, Man. In 1982, Menno and Kay moved to Chilliwack to be near their sons, and Menno worked 10 years for Sears’ automotive department. After Kay’s death, Menno volunteered at the MCC Store and Fraser Valley Gleaners. Woodworking was his hobby. Despite hardships, he said God was good to him. In answer to Menno’s prayer, Rosa entered his life. They enjoyed simple pleasures and travelling. They lived in Chilliwack, then moved to Abbotsford, B.C., where they joined Clearbrook MB Church. October 2011, Menno had a stroke and moved to the Cottage Pavilion. His life was marked by thankfulness to God for Rosa, his family, friends and caregivers. Menno and Rosa prayed he’d walk again, but God had other plans.