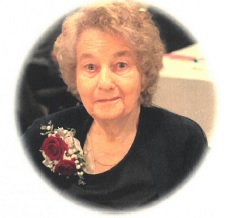 Mary grew up on a farm near Wembly, Alta., and attended school until Grade 9. She accepted Jesus as Saviour at 11, and in her early teens was baptized into La Glace (Alta.) MB Church. She later attended Coaldale (Alta.) Bible School for 3 years. In the choir at La Glace MB, she caught Abe Konrad’s eye. While Abe attended MB Bible College in Winnipeg, Mary worked as a ward aide at the hospital in Grande Prairie, Alta. They wrote many letters and married before his graduating year. They moved to Coaldale, where Abe taught Bible school. Their first child, Edith Joy, died shortly after birth, a lifelong sorrow to Mary. Within a few years, she was busy raising 3 young boys, twins Alfred and Ernest, and Wilfred. In 1960, the family moved to Grassy Lake, Alta., where Abe pastored the MB church while continuing further studies. Wesley was born in Edmonton, then Chester, in Winnipeg. Over the next 30 years, Abe and Mary pastored MB churches in Leamington, Ont.; Niverville, Man.; and Abbotsford, B.C. (King Road). They retired to Winnipeg in 1995 to be closer to their grandchildren. They moved to Kelowna, B.C., in 2003, before returning in 2008 to Abbotsford, where they remained. Mary was joyful singer, an excellent cook, a meticulous housekeeper, and a caring wife and mother. She loved to have a beautiful home (which wasn’t always possible with a pastor’s salary and five growing boys). Abe and their sons built their house in Niverville after a photo of a house Mary admired. The family often visited grandparents in B.C., taking routes through U.S. parks, pulling a homemade tent trailer. Later, Mary and Abe continued to camp, driving across Canada to P.E.I. They celebrated her 60th birthday in Hawaii and visited the homes of King Road families in South America. Mary read and sewed and kept active by walking and biking. She even went bowling for her 80th birthday. In her last year, Mary’s health declined with increasing mental and physical difficulties. She was determined to stay in her own home as long as possible, and, with Abe’s attentive care, she was there until the end. She entered hospital May 8, 2020, and died with Abe at her side.