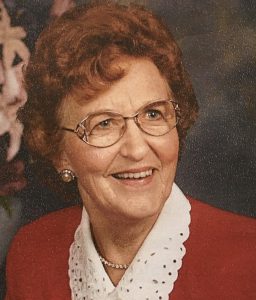 Mary grew up in a Christian home. She accepted Jesus as Saviour at 9 and was baptized at 15. Mary attended Port Royal and Erie View public schools, then completed Grades 9 and 10 at Eden Christian College, where she met her future husband Jake. Mary and Jake lived in St. Catharines, Ont., in the early years and, in 1952, purchased the farm near Port Rowan, Ont., where they raised their family. After graduating from the nursing school program at Norfolk General Hospital, Simcoe, Ont., in 1971, Mary began working there as a registered nursing assistant. Mary loved caring for patients and remained until a heart ailment forced her retirement in 1989. Jake and Mary moved to their retirement home in 2005 and to Tabor Manor in St. Catharines in 2015. Throughout her life, Mary served the church’s ladies ministries and fellowship committees, and supported Jake in his church involvement. In retirement, she also volunteered at the Port Rowan MCC Thrift Store until 2012. Mary was a devoted wife and mother who was always happy to see the children come home. One of her many joys was entertaining company; she loved it when the house was full of laughter and devotions. She was a positive influence on everyone, whether they had known her for years or had just met. Mary had a strong faith and a gift for making people feel welcome.