What's New
“I’m Sorry” : Pope Francis addresses a “deplorable...
A matter of love: Reframing abortion
“Any chance you might be expecting a goldfish?”
Abortion, the image of God, and faithful witness...
Choosing motherhood: The sacrifice of honouring life
MWC Assembly small but full of joy
Bad back doesn’t hold back MDS volunteer
Transition in CCMBC National Faith and Life Leadership
Leading through the trauma of covid: Part three...
The church distracted: When the main thing is...
Home Mary Enns 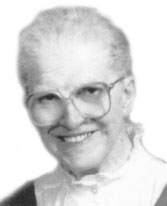 Mary accepted Jesus as Saviour at 18. She attended Zion School and worked on the farm. In 1947, Mary began working at Bethesda, Vineland, Ont., for 2.5 years, followed by 1.5 years at Ninette (Man.) Sanatorium. She earned a teaching diploma in Winnipeg. Mary started as a full-time housekeeper, which led to babysitting for the Thorvaldsons and Hills, 2 families with 2 girls who became Mary’s source of pride and many smiles. Mary travelled to 22 countries, including India, Spain, Wales, Switzerland, Russia, Israel and Iceland. She made good friends at Lions Place, Winnipeg, 2006–2011. A stroke Oct. 2, 2011, affected her mind, and she moved to Donwood Manor, Winnipeg, Feb. 6, 2012.